Clarksville, TN – “New York, New York, it’s a wonderful town!” This fall, the Roxy Regional Theatre embarks on its 32nd season of live entertainment with the 70th Anniversary of Leonard Bernstein’s legendary musical about three sailors who manage to find love and incredible adventures in the Big Apple while on a 24-hour leave. 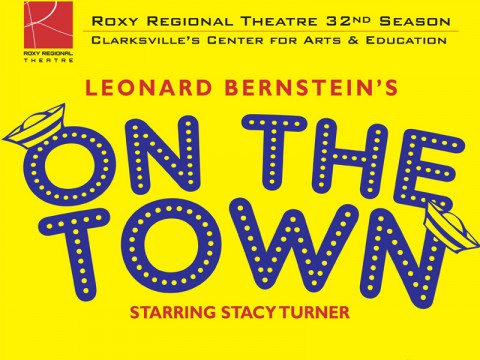 Such memorable numbers as “New York, New York,” “Lonely Town” and the hilarious “I Can Cook Too” come to life through the orchestral talents of Anne Glass on piano, Tom Bridwell on trombone, Kathryn Holley on flute, Tom Tapscott on clarinet, John Waddle on bass and Thad Wallus on drums.

“On the Town” is made possible in part through the generous support of Bridgestone Metalpha USA, Inc.  Additional funding support has been provided by Dr. Ernest & Joan DeWald, Scott & Lynn Jensen, Angela Knowles, Garnett & Nancy Ladd, and Jim B. Marshall.

The Roxy Regional Theatre’s production of this iconic musical comedy written by Betty Comden and Adolph Green, with music by Leonard Bernstein and based on an idea by Jerome Robbins, coincides with this fall’s Broadway revival.  First produced on Broadway in 1944, “On the Town” was also made into a 1949 film starring Gene Kelly and Frank Sinatra.

Wednesday, September 17th, is the traditional pay-what-you-can preview of  “On the Town”.  All tickets not pre-sold at the regular ticket price will go on sale at 6:30pm for whatever price patrons wish to pay.

“On the Town” runs September 17th through October 4th, playing Wednesdays and Thursdays at 7:00pm and Fridays and Saturdays at 8:00pm, with a 2:00pm matinee on Saturday, September 27th.

Active-duty military, APSU students and CitySaver coupon holders can receive two tickets for the price of one to Wednesday and Thursday performances during the run.