The Governors come into contest amidst a three-game losing streak, failing to break the 70-point mark in 11 of the last 12 contests. 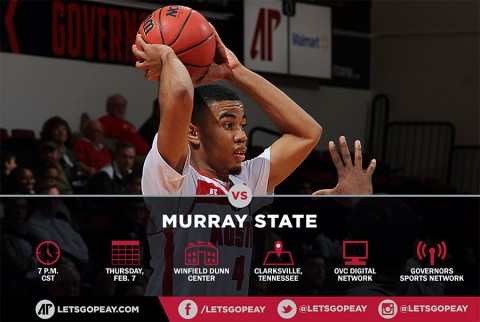 APSU was outscored 76-64, Thursday night in an excruciating loss to UT Martin.

Now 2-7 in the OVC the Governors are desperate in search for a league win. If the Govs are to have any potential chance of reaching the OVC tournament they will have to turn the tide immediately.

Josh Robinson shook off a struggling start to finish with a team-best 15 points against UT Martin, going 8-of-9 from the free-throw line. Chris Horton narrowly saw his double-double streak at five with a 14-point, nine-rebound performance against UT Martin.

Meanwhile, the Govs will play host to a Racers team that owns the nation’s second longest winning streak—18 games (behind Kentucky’s 22). After capturing the CIT last spring, Murray State was the overwhelming choice as the OVC West favorite in 2015. They have lived up to the advanced billing.

OVC Preaseason Player of the Year Cameron Payne is the league’s leading scorer at 19 points per game while also averaging 5.9 assists per game. Just a sophomore he already has eclipsed the career 1,000-point mark.

The Series: This is the 123rd meeting between the two OVC rivals, Austin Peay and Murray State, with the Governors trailing, 81-41. The Racers won both meetings last season’s earlier meeting, 89-67, January 11th in Murray, and 96-88, January 31st, in Clarksville. The Governors have lost seven straight in the series.