Clarksville, TN – Former Austin Peay State University women’s soccer standout Tatiana Ariza has been on the world’s biggest stage before, but this year at the 2015 FIFA Women’s World Cup she has helped the Columbia National women’s team to its deepest run in their history.

Ariza, who helped Austin Peay to 47 wins from 2010-13, has been on four World Cup level teams for Columbia, starting with their Under-17 and Under-20 teams and the past two national teams that qualified for one of the top 24 spots at the World Cup Tournament. 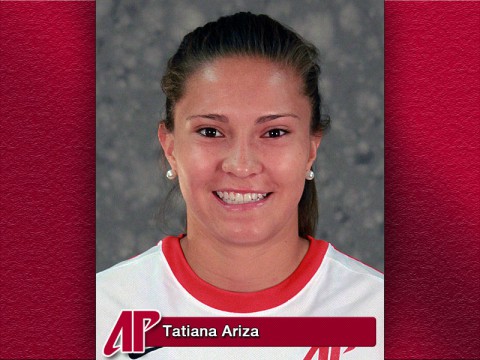 In fact, Ariza has been a part of the only two Columbia National women’s teams to qualify for the World Cup tournament, first in 2011 in Germany and this year in Canada.

Overall, she has appeared in 35 international matches heading into the World Cup for Columbia, scoring eight goals in those contests.

In 2011, Ariza and her teammates failed to get out of the group stage, going 0-2-1 in its group and not scoring a goal in the three matches.

But this year, Columbia advanced to the knock out round (Round of 16) by going 1-1-1 in their group to finish third in Group F, tying Mexico 1-1, defeating France 2-0 and losing to England 2-1.

And right in the middle of the Columbia’s success in group play was Ariza, who recorded an assist on the match tying goal by Daniela Montoya versus Mexico in the 82nd minute – the first World Cup goal recorded by Columbia in the nation’s history.

But that was just the beginning for Ariza and Columbia, who in their next match pulled off one of the biggest upsets in World Cup history, as the number 28th-ranked Columbia squad knocked off France — the number three-ranked team by FIFA – 2-0.

Ariza was on the field for one of the two Columbia goals in the France victory, coming off the bench late in the match, right before Catalina Usme put the match out of reach with a goal in stoppage time to make it 2-0.

Although Columbia lost its final Group F match to number-six ranked England, Ariza was once again on the field when Columbia scored its lone goal in the 2-1 loss, making its three out of the four goals scored in group play with the APSU alum on the field.

It will be the third meeting in FIFA A-level match between the two countries, with the United States defeating Columbia in the 2011 World Cup and 2012 Olympics by identical 3-0 finals.

And while few will give Ariza and her Columbian teammates much of a chance against the number-two ranked U.S. squad, this World Cup has been a history-making run for the former Austin Peay soccer standout.