For the second week in a row, Morris broke the 100-yard mark in rushing, needing just 15 carries to pick up 136 yards on the ground (9.1 ypc), including a touchdown. He added 30 more yards on three catches. It marks the first time an Austin Peay runner has posted consecutive 100-yard days since Otis Gerron in 2014. 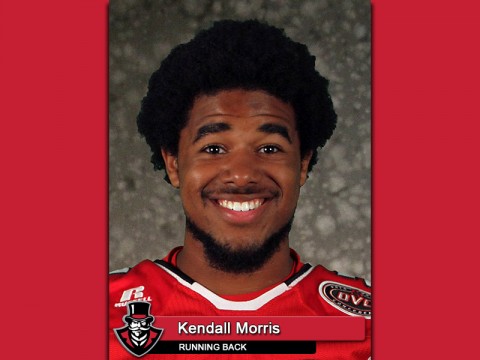 Morris started slow, picking up 10 yards on six first-half carries, but broke out in the second half. His first two touches in the third quarter went for 26 and 30 yards, setting up the Governors first second-half touchdown.

His first touch of the fourth quarter found pay dirt. Taking the option pitch from Timarious Mitchell, Morris hit the corner, broke a tackle and showed great field vision on his 62-yard touchdown scamper for APSU’s final points of the day. It was his third straight game with a touchdown, a feat unequaled by an Austin Peay back since Ryan White during the 2011 season.

After redshirting last season, Morris has stepped into the feature back spot and been a bright spot for Austin Peay’s offense. The St. Peters, Missouri native’s 425 rushing yards rank fourth in the OVC and 41st nationally, and his 5.45 yards per carry mark also places him fourth in the conference.

He’s the first Governor to earn an OVC weekly honor since Mickey Macius shared Newcomer of the Week honors for the week of October 19th, 2014.