Kennesaw, GA – With finals and its longest break between games to date behind it, Austin Peay State University women’s basketball team returns to the court when it meets Kennesaw State in a 1:00pm (CT), Saturday contest at the KSU Convocation Center. 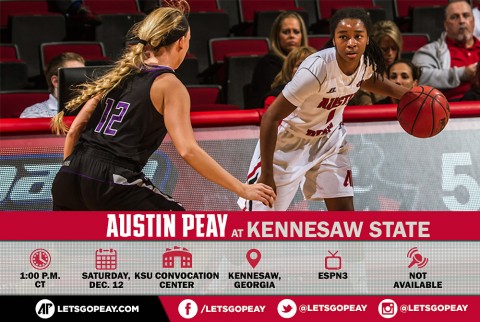 The Govs seven-day break between games is its longest this season and follows a 28-day span that saw it play 10 games, including nine games in an 18-day stretch to begin the season.

Combined with one of the nation’s toughest schedules, the wear-and-tear may have been on display as Austin Peay has been outscored in the second half in each of its last five games (127-78 in the third quarter and 225-151 in the second half).

Austin Peay did a better job of keeping up in the second half during its 88-69 loss at Western Kentucky, last Saturday. The Govs lost the second half battle by just four points, 40-36, in the 19-point decision.

However, Austin Peay’s defense was a concern in the contest as it allowed the Hilltoppers to shoot a season-best 60.3 percent from the floor. It was the highest field-goal percentage allowed by an APSU team since February 7th, 2009 when it allowed Murray State to shoot 62.5 percent. 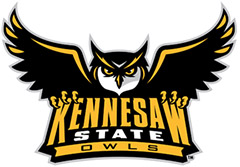 Kennesaw State concludes a brief two-game homestand with Saturday’s contest. The Owls are 3-2 at the KSU Convocation Center this season with wins against Presbyterian, Western Carolina and New Orleans. KSU returns seven letterwinners from last season’s squad that went 17-13, including a 10-4 mark at home. Leading scorers Jasmine McAllister and Deandrea Sawyers return from that team and are again the team’s top two scorers this season.

End its seven-game losing streak… Be its first road win this season… End a 14-game losing streak in road nonconference tilts that dates back to November 12th, 2013… Be its second straight win against Kennesaw State… Make it 2-0 at KSU’s Convocation Center… Be its first win against a Division I opponent this season… Make head coach David Midlick 3-8 in his first season at Austin Peay and 48-24 in his third season as a head coach overall… Make the Govs 454-658 overall since 1976-77.