HomeEventsCelebrate the Music and Legacy of the King of Rock and Roll...
Events 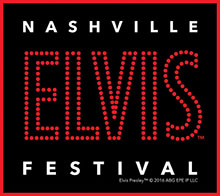 Nashville, TN – Music City Festivals, LLC is proud to announce the Nashville Elvis Festival – a premier Elvis event unlike any other, celebrating the music and legacy of Elvis Presley.

Fans from around the world will gather in Middle Tennessee March 30th-April 2nd, 2017 for 4 days of celebrity appearances, live music events and on-stage interviews with Elvis’ friends and band members – hosted by Tom Brown, a longtime host of select Elvis Week events and one of the hosts of the Gates of Graceland web series.

Two special VIP events will feature live recreations of the “’68 Comeback Special” and an Elvis recording session inside one of Music City’s top recording studios (featured on the hit series Nashville).

Tickets are on sale now at www.NashvilleElvisFestival.com

The historic Franklin Theatre will serve as the host venue, with additional events taking place at Paragon Studios and GRAYS on Main – all located just south of downtown Nashville in the charming suburb of Franklin, Tennessee.

Special guests for Nashville Elvis Festival will include members of Elvis’ inner circle, who will share their memories of the King of Rock and Roll. Among those scheduled to appear are Jerry Schilling, Elvis’ best friend, “Memphis Mafia” member, entertainment industry veteran and an Executive Producer of the 2016 feature film, Elvis & Nixon; D.J. Fontana, a Rock and Roll Hall of Fame inductee who was Elvis’ drummer for 14 years and played on over 460 of his RCA cuts; Richard Sterban of The Oak Ridge Boys, who toured with J.D. Sumner and the Stamps Quartet singing backup for Elvis (as seen in the film, Elvis On Tour); Norbert Putnam, an original member of the Muscle Shoals Rhythm Section and legendary session musicians Nashville Cats, who is featured on many of Elvis’ best recordings; Disc jockey and television game show host Wink Martindale, who was at the studio the night Dewey Phillips played Elvis’ “That’s All Right” for the first time. Wink hosted the TV show Teenage Dance Party, which featured Elvis as a special guest and the two became lifelong friends; Sandy Martindale, who dated Elvis for six years and remained friends with him throughout his life. She’s also featured as a dancer in several Elvis movies including Viva Las Vegas; and Armond Morales, best-known as the bass vocalist (and founding member) for the legendary vocal group, The Imperials. The group is well known to Elvis fans, thanks to the years they spent backing Elvis on tour and in Las Vegas (as seen in the 1970 documentary film Elvis: That’s the Way It Is); and also appearing is legendary Gospel artist Joanne Cash, the younger sister of Johnny Cash, who first met Elvis when he opened for her famous brother. Additional guests will be announced.

The festival house band for all live performances will be The EAS Band, the official band for EPE’s 2016 Ultimate Elvis Tribute Artist Contest, known for their performances all over the world backing tribute artists and giving the feeling and excitement of being at an actual Elvis concert.