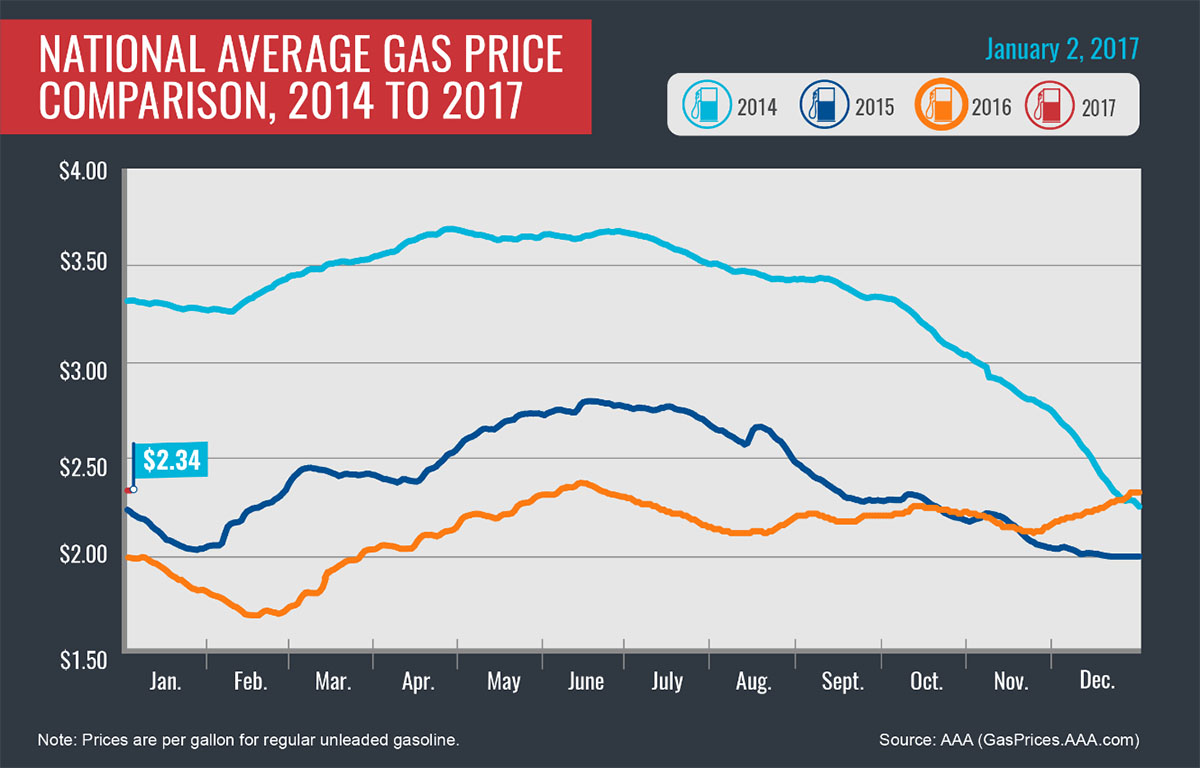 Tampa, FL – The New Year began with increased gas prices reaching today’s average of $2.34 per gallon. The national average has moved higher for 34 of the past 35 days, largely due to market reactions to last fall’s OPEC deal.

Compared to a week ago, pump prices have risen 5 cents nationwide, 9 cents in Florida, 6 cents in Georgia, and 4 cents in Tennessee. 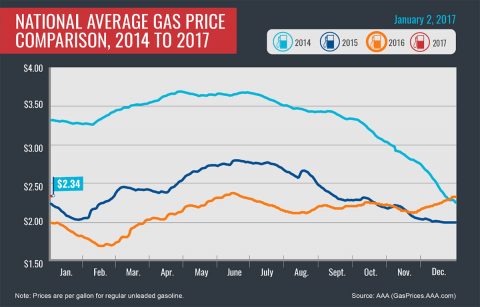 The region saw some temporary inventory declines last week, due to exports and a power outage at CITGO’s Corpus Christi, Texas, refinery that resulted in flaring and excess emissions, according to OPIS.

Florida (+9 cents), Arkansas (+8 cents), Texas (+7 cents) and Mississippi (+7 cents) all make the top 10 list for largest weekly increases. Drivers in Florida and Georgia also saw modest gas tax increases of less than a cent at the start of the new year.

“Moving into 2017, retail prices will continue to hinge on the ability of cartel countries to successfully implement production cuts,” said Mark Jenkins, spokesman, AAA – The Auto Club Group. “Retail averages will begin to increase, leading up to the summer driving season, as seasonal refinery maintenance gets underway this spring.”

Both crude oil benchmarks closed out the year posting the largest annual gains since 2009, with Brent gaining 52 percent and West Texas Intermediate gaining 45 percent to close the year. These gains can largely be attributed to the OPEC agreement – a deal brokered by OPEC and non-OPEC countries – to cut crude oil production by 1.8 million barrels per day in an effort to re-balance the global oil supply.

Additionally, as 2016 came to a close, U.S. gasoline production reached a record high of 10.537 million bbl for the last week in December. Typically, domestic demand falls in January, so higher gasoline production may lead to a stock build in the coming weeks, which could push pump prices lower.

In 2017, traders will continue to monitor whether participating countries adhere to the OPEC agreement and the rate at which U.S. gasoline production increases. At the close of formal trading session on December 30th on the NYMEX, WTI closed out the year down five cents to settle at $53.72 per barrel.