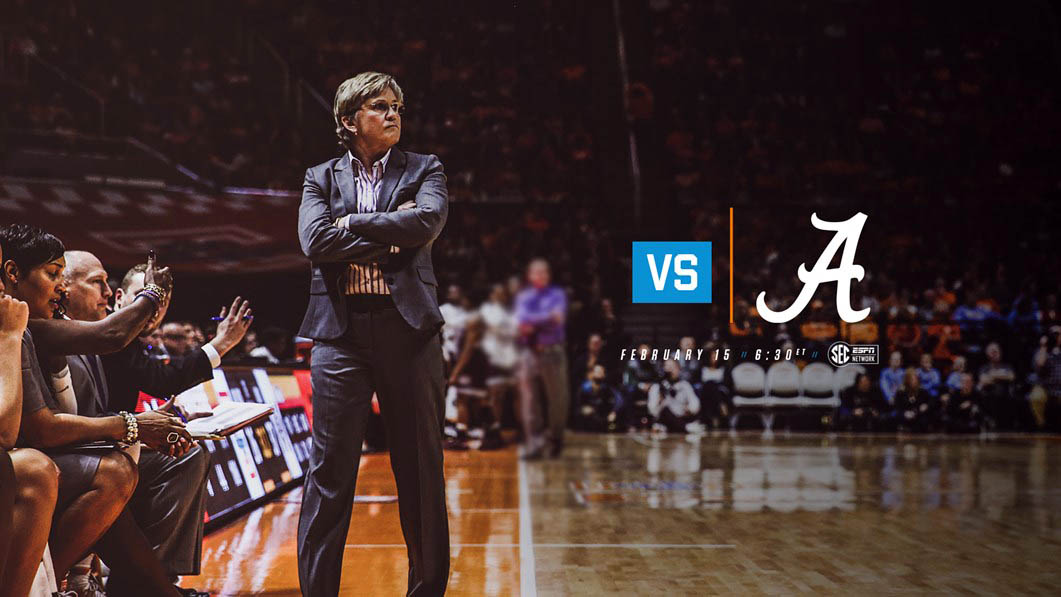 The 55th meeting between the Lady Vols and Crimson Tide is an important one, as UT tries to maintain its second-place position in the league standings, while the Crimson Tide tries to improve its chances of earning an NCAA Tournament bid with a quality win on the road. The Lady Vols, who lead the series, 49-5, also look to end a three-game losing skid vs. Bama. 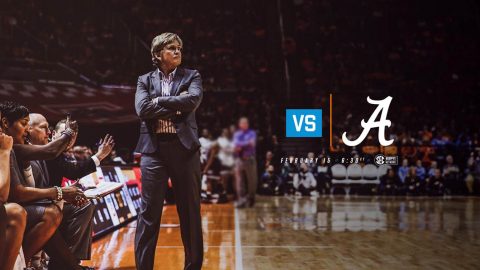 Tennessee has won four straight and five of its last six games to improve its position for seeding in the SEC and NCAA Tournaments.

The most recent feather in Tennessee’s cap was a 62-46 win over #18/18 Georgia on Sunday afternoon in front of a “Live Pink, Bleed Orange” crowd of 12,523 in Knoxville, improving UT’s record against ranked teams to 6-3 this season.

Alabama, meanwhile, has lost four of five and six of its last eight games after standing 13-4 following a 65-51 home victory over LSU on January 11th. The Crimson Tide went on the road to end a four-game skid on Sunday, edging Ole Miss in Oxford, 82-79, by outscoring the Rebels by 10 in the second half after trailing by seven at the break.

Paul Sunderland (play-by-play) and Debbie Antonelli (analyst) will describe the action for the UT-Alabama television broadcast on the SEC Network.

After facing Alabama to close out a two-game home stand, the Lady Vols will hit the road for two contests before returning home to close out the 2017-18 regular season slate.

The Lady Vols then head to Gainesville on February 22nd to take on Florida at 6:00pm CT in a contest carried online via SECN+.

UT closes out the schedule on February 25th with South Carolina on Lady Vol Senior Day. Tip-off has been set for 3:00pm CT on ESPN2.

Remember Where We Started?

As we head down the stretch with UT at 21-4 overall, 9-3 in the SEC, No. 11 nationally and in second place in the league, it seems like a good time to recall the outlook Tennessee had at the beginning of the season.

UT was predicted to finish fourth in the SEC by the media and fifth by the coaches.

Tennessee opened the season ranked No. 11 in the AP Poll and No. 14 in the USA TODAY Coaches Poll.

UT had lost two starters and three other players with starting experience from last year’s team.

Holly Warlick returned five players from a year ago, but only three with extensive minutes.

The Lady Vols welcomed five new players, including the No. 1-ranked 2017 signing class and a JUCO All-American coming off a redshirt year after having knee surgery.

Two other UT freshman (Evina Westbrook, Anastasia Hayes) have earned the honor this season as well, while Jaime Nared has twice been named the SEC Player of the Week.

Nared also was named the College Sports Madness National and SEC Player of the Week on two occasions this season.

Jaime Nared and Mercedes Russell have been included as members of the Wade Trophy Award Midseason Watch List and Citizen Naismith Trophy Late Season Watch List. Nared is among the top 10 for the Cheryl Miller Awards, while Nared is in the same company for the Lisa Leslie Awards.

Mercedes Russell crossed the 1,000-rebound mark vs. Georgia with her eighth rebound en route to 15 for the afternoon.

She stands one point short of 1,500 for her career.

Russell will become only the sixth Lady Vol to reach 1,500 points and 1,000 rebounds. The others in that club are Chamique Holdsclaw, Glory Johnson, Bashaara Graves, Sheila Frost and Tamika Catchings.

Against Alabama, Holly Warlick will coach her 200th game and seek the 150th win of her career.

UT has three starters averaging double figures in scoring, including seniors Jaime Nared (17.3) and Mercedes Russell (16.2), and freshman Rennia Davis (11.8). Freshmen Anastasia Hayes (9.5) and Evina Westbrook (8.7) are on the brink of double digits.

Tennessee has outscored its opponents in the points-in-the-paint category in 16 of 25 games, averaging a 40.1 to 34.6 difference.

The Lady Vols bested their foes in second chance points 16 times and tied on three occasions.

Tennessee has won the points on fast break war in 18 games, averaging 12.4 per contest. In losses, that number is 8.4.

When UT has more fouls than its opponent, the Lady Vols are 2-3, losing to Texas A&M, Notre Dame and LSU, beating Marquette in OT and winning by 14 at Kentucky.

Tennessee is averaging 80.2 points, 17.1 turnovers per game, has seven games of 20+ turnovers and two more with 19 miscues.

Mistakes are more likely to happen with an uptempo team, vs. aggressive guard-oriented opponents and with three of Tennessee’s top performers being freshmen.

Nobody likes turnovers, but this year’s numbers are in the ballpark (in some cases fewer) than those recorded by some of Tennessee’s finest (NCAA title) teams.

Against the Tide, the Lady Vols are 22-0 in games played in Knoxville and are 18-2 in Tuscaloosa.

Tennessee is 9-3 vs. Alabama at neutral sites.

Alabama coordinator of player development, recruiting and video operations Brian Johnson is a 2016 Tennessee graduate who served as a manager on Holly Warlick‘s staff for four seasons.

Last Meeting Between UT And UA

Despite a double-double by Mercedes Russell, Tennessee was never able to get in a consistent groove against Alabama in the second round of the SEC Tournament at Bon Secours Wellness Arena, falling 72-64 on March 2nd, 2017.

Russell finished with 16 points and 12 rebounds in the contest, both of which were game highs. Diamond DeShields posted another all-around performance, totaling 15 points, six rebounds, five assists and three steals.

Five players reached double-digit scoring for the Crimson Tide, who were led by Meoshonti Knight’s 16 points and six rebounds. Ashley Knight posted a double-double with 10 points and 11 rebounds as well as six blocks in the contest.

The Lady Vols (13-8, 4-4 SEC) extended their win streak to 42 straight games against the Crimson Tide (13-9, 2-7 SEC), marking (then) the third-longest active in-conference winning streak in NCAA Division I.

Alabama’s 42 points were its fewest of the season and the fewest allowed by Tennessee since UT beat Georgia, 75-41, on March 6th, 2015.

Mercedes Russell registered her eighth double-double of the season with 12 points and 13 rebounds. She also had two blocks and a career-best three assists in the win.

Tennessee limited Alabama to its worst shooting performance of the season at just 27.5 percent (14-of-51). The Crimson Tide was 2-of-14 from 3-point range, marking its second-worst performance on the year.

Alabama was picked to finish ninth by both the coaches and media in preseason polls, and the Crimson Tide currently sits in eighth place.

Alabama returned all five starters from last year’s squad, which finished 22-14 overall, 5-11 in the SEC, and placed 11th in the league.

The Tide beat UT in Tuscaloosa during the regular season and in the SEC Second Round in Greenville last season after defeating the Lady Vols the previous year in Tuscaloosa as well.

First-year Tennessee head football coach Jeremy Pruitt was the defensive coordinator on Alabama’s 2018 football national championship team, served on the staff during the 2009, 2011 and 2012 title years and played two seasons under Gene Stallings for the Crimson Tide.

Trailing by one with 36 seconds to go, junior Shaquera Wade converted on a layup after a timely steal, and sophomore Jordan Lewis followed with a pair of free throws moments later to seal the 82-79 victory for Alabama at Ole Miss in women’s basketball action on Sunday.

Lewis finished with a career-high 23 points, converting 11-of-13 from the free throw line, along with a game-high seven rebounds and game-best three steals. The Crimson Tide’s four other starters also had double-digit points in the win as senior Quanetria Bolton ended with 16, senior Hannah Cook with 15, senior Ashley Williams with 11 and Wade with 10.

For the Rebels, junior Torri Lewis led the way with 26 points, 21 of which came from beyond the arc, while sophomore Shelby Gibson added 20.

Mercedes Russell collected the 1,000th rebound of her fantastic career, leading No. 11/11 Tennessee to a 62-46 victory over No. 18/18 Georgia on Sunday at Thompson-Boling Arena.

The Lady Vols put on a stellar defensive performance in holding Georgia to a season-low 46 points and 29.5 percent shooting (18-of-61) from the field. UT dominated on the glass throughout the game, finishing with a 50-30 rebounding advantage, and forced UGA into 20 turnovers.