HomeEventsRoxy Regional Theatre to perform Shirley Lauro's "A Piece of my Heart",...
Events

Clarksville, TN – Although nearly 15,000 women served in Vietnam during the war, at that time there was little to no media coverage about these unsung heroes’ experiences and sacrifices, or their homecomings and readjustment difficulties.

This month, the Roxy Regional Theatre explores the often overlooked contributions of women in service with Shirley Lauro’s “A Piece of my Heart”, opening Friday, April 13th, at 8:00pm. In keeping with the theatre’s traditional pay-what-you-can opening night, all tickets not pre-sold at the regular ticket price will go on sale at 7:30pm that evening for a $5.00 minimum donation.

Named “the most enduring play on Vietnam in the nation” by The Vietnam Vets Association, this powerful drama follows the true stories of six courageous women sent to Vietnam and their struggles to make sense of a war that irrevocably changed them and a nation that shunned them.

“Shirley Lauro’s “A Piece of my Heart” is a work I had the opportunity to see many years ago and one which has stayed in my mind and heart ever since,” notes Roxy Regional Theatre Executive Director Ryan Bowie, who also directed the play. “I knew, at some point in my professional career, I wanted to tackle this piece and bring it to the stage myself. The Roxy Regional Theatre, with its emphasis on education and its proximity to the Fort Campbell military base, seemed to be the perfect venue to bring this piece to life.”

To that end, as a show of appreciation to service members in the area, active-duty military and veterans can receive two tickets for the price of one to Wednesday and Thursday performances during the run. 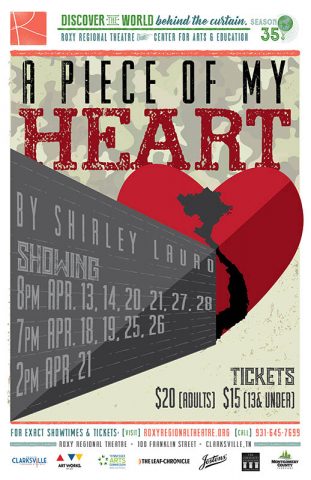 Enhanced with video projections and other multimedia, the play portrays each of the six young women before, during and after her tour in the war-torn nation and ends as each leaves a personal token at the Vietnam Veterans Memorial in Washington, DC.

Emily Rourke, well-known to Roxy audiences from countless roles including Annelle in “Steel Magnolias” and Patty in “A Charlie Brown Christmas”, takes on the role of Martha, a self-described army brat who joins the Navy as a nurse to uphold family expectations.

Quinn Tierney Vaira, who has previously been seen as Glinda in “The Wizard of Oz” and Frieda in “A Charlie Brown Christmas”, plays country-rock singer MaryJo, who travels to Vietnam as a USO performer to entertain the troops.

The role of Sissy, a sheltered small-town girl who joins the Army as a nurse to seek adventure away from home, is played by Jackie Ostick, whose numerous Roxy credits include Mrs. Van Daan in “The Diary of Anne Frank” and Violet in “A Charlie Brown Christmas”.

Sara Fetgatter, whom audiences may remember as Linda in “The Wedding Singer” and Yitzhak in “Hedwig and the Angry Inch”, returns to the Roxy stage as Whitney, a wealthy young Vassar graduate who goes to Vietnam to complete a year of service as a Red Cross volunteer.

Newcomer Zoe Abuyuan joins the cast as the anti-war LeeAnn, a Chinese-Italian young woman who joins the Army as a nurse, expecting to be stationed in Hawaii but sent to Vietnam instead.

Austin Peay State University graduate Jamila Hunter makes her Roxy Regional Theatre debut as Steele, an African-American intelligence officer with the Women’s Army Corp who, regardless of her high rank, receives unfair treatment from her superiors.

Taking on all of the male roles in the play is John Adkison, who last appeared on the Roxy stage as Harold Hill in 2015’s production of “The Music Man” and whose films are being screened at the Roxy this month as part of a special Sunday afternoon documentary series.

“A Piece of my Heart” is presented through special arrangement with Samuel French, Inc., and is made possible in part through the generous support of Walter & Cindy Marczak. Additional funding support has been provided by Kurt & Kerri Kowalski, Gary & Janet Mund and John & Cathy Stanton.

Performances run April 13th through April 28th on Wednesdays and Thursdays at 7:00pm and Fridays and Saturdays at 8:00pm, with a 2:00pm matinee on Saturday, April 21st.

Tickets are $20.00 (adults) and $15.00 (ages 13 and under) and may be reserved online at www.roxyregionaltheatre.org, by phone at 931.645.7699, or at the theatre during regular box office hours (9:00am to 2:00pm, Monday through Friday, and one hour prior to curtain). Military, APSU students and CitySaver coupon holders can receive two tickets for the price of one to Wednesday and Thursday performances during the run.