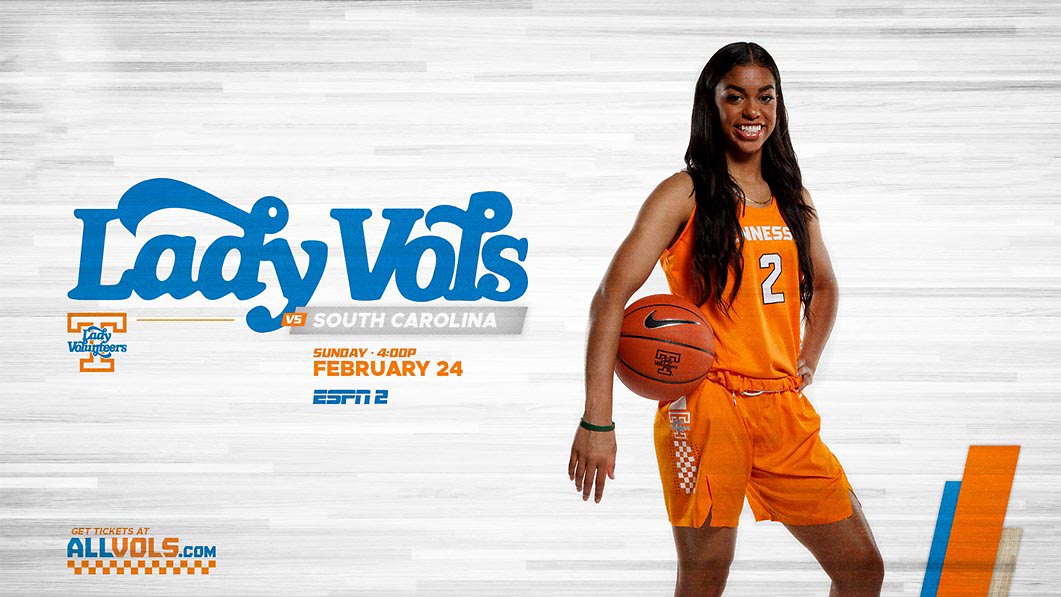 Including this match-up, the Lady Vols have three contests remaining during the regular season. The next two are at home (No. 13/13 South Carolina, Vanderbilt) and the last one is away (Ole Miss).

The Lady Vols enter this contest having won two of their past three games and five of their last seven, including victories over LSU, Florida, Vanderbilt, Auburn and RV/RV Missouri. 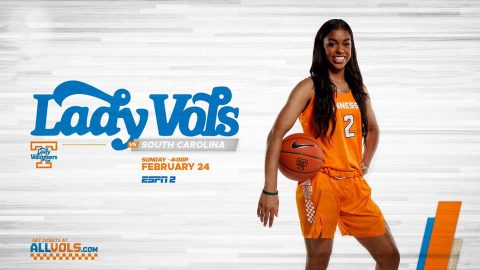 South Carolina also enters with a loss in its rearview mirror, falling at home to No. 16/17 Kentucky Thursday night, 65-57. The Gamecocks have lost seven times, and six of those came against ranked teams, including five vs. top-10 squads.

Tennessee holds a 50-7 all-time record in this series and has won three of the past four vs. USC, giving a Holly Warlick a 5-4 record vs. Dawn Staley’s program.

Sunday’s contest is a return to Rocky Top for Gamecocks guard Te’a Cooper and assistant coach Jolette Law. Cooper was at UT from 2015-17 before making the move to South Carolina. She was SEC All-Freshman in 2015-16 and sat out 2016-17 with a knee injury. Law, meanwhile, was an assistant coach at Tennessee from 2012-17 before moving over to USC.

Paul Sunderland (play-by-play) and LVFL Kara Lawson (analyst) will have the call for the ESPN2 broadcast.

Stop by the Fan HQ table at Section 129 on the way into the game to enter to win prizes & to receive a World’s Best Fan mug. One per person while supplies last.

Enjoy the pregame Kids’ Corner at Gate F. It opens one hour prior to tip-off. The fun includes free face painting, the Big Orange prize wheel, visits from Smokey X and cheerleaders, thank you letters to the team and a balloon twister!

Kids 12 & younger can shoot a layup on the court after the game.

Kids 12 & younger also may pick up a wristband at the Fan HQ table on the concourse to participate in the pregame high-five tunnel. Wristbands are limited. To purchase discounted group tickets and reserve wristbands for your team, call 865.946.7000.

Tickets available for as low as $15.00 at AllVols.com.

Tennessee has won three of the past four meetings with South Carolina, including wins in Columbia and Knoxville last season. UT lost to the Gamecocks in the 2018 SEC Tourney.

Holly Warlick is 5-4 vs. Dawn Staley and the Gamecocks since taking over as head coach at UT in 2012-13.

After defeating South Carolina, the regular season SEC champs at 14-2, the 13-3 Lady Vols went on to claim the 2014 SEC Tournament title in Duluth, GA.

Tennessee lost to South Carolina, 64-60, on February 2nd, 2012, in Knoxville, but rebounded to defeat USC in the 2012 SEC Tournament semifinals in Nashville, 74-58, en route to its 16th SEC postseason championship.

Tennessee has turned the tables after a rough start to the league schedule, winning five of its last seven games to go from 1-5 in the league to 6-7 entering the South Carolina game.

After bursting to an 8-0 record and standing 12-1 after opening SEC play with a win at Auburn, a youthful Lady Vols team (7 of 10 active players are freshmen and sophomores) went through some harsh growing pains, losing six straight games from January 6th to January 24th.

Losing four of the games by a combined nine points, UT dropped five consecutive league tilts before bouncing back with wins vs. LSU, Florida and Vandy, a loss at Mississippi State and wins over Auburn and Missouri.

Keep in mind that UT not only lost All-SEC players Mercedes Russell and Jaime Nared from a year ago, they lost the SEC’s 2018 6th Woman of the Year in 5-7 guard Anastasia Hayes, who was dismissed from the team due to a rules violation, and 6-3 graduate transfer Lou Brown, who started 71 games at Washington State and was expected to play a key role for UT this season before being sidelined by a torn ACL.

Cheridene Green snagged a game-high 12 rebounds while scoring 11 points vs. A&M to post her eighth career double-double and sixth of the season. She has recorded 10+ rebounds in eight of 13 SEC games.

Evina Westbrook had five assists against the Aggies, moving her total of games with 5+ assists to 17 on the season.

South Carolina returned four starters and eight total letterwinners from a year ago.

Guard Te’a Cooper, a transfer from Tennessee who sat out last season, leads USC in scoring at 12.2 ppg.

The Gamecocks lost in the NCAA Elite Eight.

Senior forward Alexis Jennings narrowly missed a double-double with 12 points and nine rebounds in her 34 minutes on the court.

While the teams tied with 34 rebounds each, Kentucky won the battle of the boards in the fourth quarter 13-6, including four-straight one-and-done USC possessions during a key 13-3 run early in the period.

No. 12 Tennessee erased a 16-point first-half deficit and closed within three in the third quarter but couldn’t overcome No. 8 South Carolina, falling 73-62 in the quarterfinals of the SEC Tournament at Bridgestone Arena on March 2nd, 2018.

Freshman Anastasia Hayes led Tennessee (24-7) in scoring, tying her career high of 17 points. Senior Jaime Nared posted a double-double for Tennessee with 15 points and 13 rebounds, playing her ninth 40-minute game of the season.

After a senior day ceremony that celebrated their careers in the orange and white, Mercedes Russell, Jaime Nared and Kortney Dunbar helped lead the Lady Vols (23-6, 11-5 SEC) to their third consecutive win against the Gamecocks (23-6, 12-4 SEC).

After a slow start on the offensive end, Tennessee opened the second half with a 14-0 run and grabbed all momentum. The Lady Vols overcame a 10-point second quarter deficit, which was their largest comeback in any win in 2017-18.

Tennessee outscored No. 21/22 Texas A&M 20-17 in the fourth quarter, but it wasn’t enough to overcome an Aggies team that scored 27 points on nearly 70-percent shooting in the third quarter to send the Lady Vols to a 79-62 setback in Reed Arena.

UT (17-9, 6-7 SEC) was led in scoring by sophomore guard Evina Westbrook who had 17 points and five assists. Senior forward Cheridene Green posted a double-double with 11 points and 12 rebounds, and Rennia Davis also managed double digits, finishing the evening with 10 points.

Kayla Wells was the high scorer for Texas A&M (20-6, 9-4 SEC) with 29 points. Chennedy Carter was close behind with 28 points, while Shambria Washington had 11.

The Tennessee Lady Vols is back at home for its final regular season home game, as UT hosts Vanderbilt on Thursday at 7:00pm (SEC Network) in the Senior Night game for Cheridene Green and Meme Jackson.