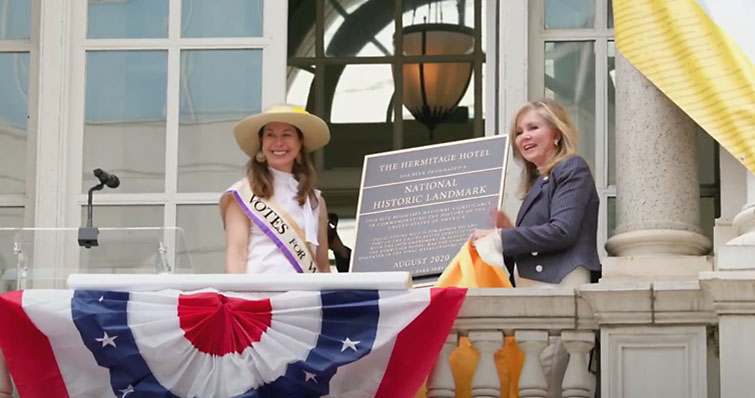 Nashville, TN – One hundred years ago today, Tennessee became the “Perfect 36th” state to ratify the 19th Amendment. This achievement fulfilled more than 70 years of tireless efforts by suffragists to enfranchise American women under the United States Constitution.

To honor this historic anniversary, Senators Marsha Blackburn (R-Tenn.) and Dianne Feinstein (D-Calif.) assembled a special project for the Smithsonian: the pair recruited 22 of their female colleagues to write essays about what the centennial means to them and the challenges they faced on their path to the U.S. Senate.

The exhibit, “Senators on Suffrage”, is live today as part of the National Museum of American History’s “Creating Icons: How We Remember Woman Suffrage” exhibit. An in-person component to the exhibit will follow when the museum reopens.

In her piece for “Senators on Suffrage,” Senator Blackburn writes,

As we contemplate the significance of this year’s centennial, I encourage America’s fathers, brothers, and husbands to remember that Catt and her fellow activists won the fight for the Nineteenth Amendment not because they were women, but because they were wickedly smart, and fierce advocates. They were worthy adversaries—but even worthier allies.

Senator Blackburn’s essay is available in full here. It is also running in today’s Tennessean.

History at the Hermitage 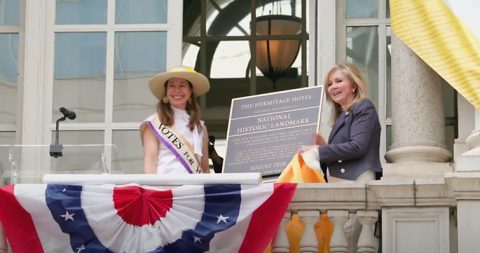 In the summer of 1920, the nationwide effort to secure voting rights for women narrowed to Tennessee as the last state needed to ratify the 19th Amendment. Local, state and national figures in suffrage, politics, industry and media converged on the Hermitage Hotel in Nashville, which served as the headquarters of both the pro- and anti-suffrage forces as they lobbied state legislators.

Carrie Chapman Catt, president of the National American Woman Suffrage Association, stayed at the Hermitage Hotel for nearly six weeks, guiding the strategy and tactics to win the final vote in the state legislature.

On August 5th, 2020, Senators Blackburn and Lamar Alexander (R-Tenn.) were joined by U.S. Secretary of the Interior David L. Bernhardt for a ceremony to designate the Hermitage Hotel in Nashville as a National Historic Landmark.


Today, Senator Blackburn spoke at the unveiling of the National Historic Landmark plaque at the Hermitage Hotel.

The Senator shepherded the bipartisan Women’s Suffrage Centennial Commemorative Coin Act through Congress, and it was signed by the President at the end of last year. As a result of her efforts, beginning today, the U.S. Mint is selling a silver dollar coin which reads “votes for women.” Watch artist Christina Hess discuss her design for the coin here.