Minneapolis, MN –  Out of 352 National Collegiate Athletic Association Division I universities, Austin Peay State University athletics ranked third overall with a grade of 77.8 percent and were 1 of 18 universities to receive an “A” grade on the 2019-20 Women in College Coaching Report Card (WCCRC) presented by The Tucker Center for Research on Girls & Women in Sport. 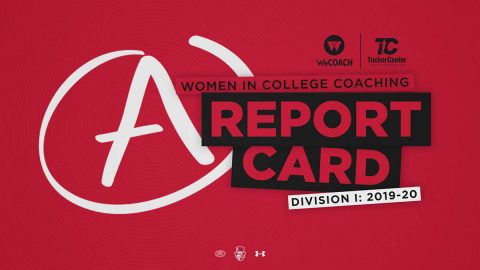 In the year before Director of Athletics Gerald Harrison arrived, Austin Peay State University received a “C” grade of 44.4 percent on the 2017-18 WCCRC.

Then in 2019, Harrison promoted Brown from associate head coach to head coach of the cross country and track & field programs, elevating Austin Peay to an “A” grade on the 2019-20 WCCRC.

“We are committed to the hiring and development of women in athletics, “said Harrison. “This recognition serves as outside confirmation of our commitment to creating a diverse atmosphere in Austin Peay State University Athletics that reflects the goals of our institution and demographics of our most important constituents – our student athletes.”

Along with Tennessee State, Austin Peay State University was one of two Ohio Valley Conference schools to receive an “A” grade on the 2019-20 WCCRC.

APSU also received a “B” grade of 61.5 percent in terms of women who occupy coaching staff positions for women’s sport teams. This included associate head coaches, assistant coaches, director of operations, and graduate assistants for women’s teams, of which the Governors filled 16 of 26 roles with female coaches.

The Tucker Center for Research on Girls & Women graded NCAA universities by the percentage of women who occupy head coaching and coaching staff positons for women’s sport teams. The grading scale developed to accurately reflect the percentage of female coaches for women’s sport teams is as follows: A= 70 to 100 percent, B= 55 to 69 percent, C= 40 to 54 percent, D= 25 to 39 percent and F= 0 to 24 percent.