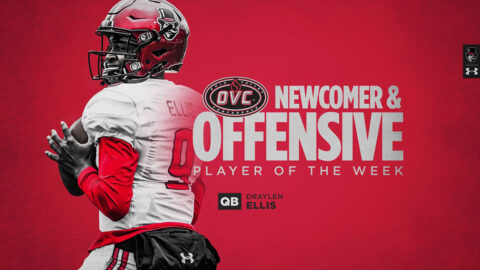 It marks the second time this season the Govs have garnered at least a share of three league weekly honors.

Two weeks ago, Brian Snead was both Offensive and Newcomer of the Week, while Jack McDonald was named co-Defensive Player of the Week for their dominant performances against Tennessee Tech.

Monday, Ellis earned STATS FCS National Freshman of the Week after setting a school record with six touchdown passes in Austin Peay’s wild 49-42 double-overtime victory at Southeast Missouri. The Olive Branch, Mississippi native went 23-for-43 for 262 yards against the Redhawks, with just one interception against his six scores. He spread the ball around to his various receivers, finding seven different receivers overall and three different Govs in the end zone.

Ellis opened his game with a four-yard fade to Harley to give the Govs a 13-0 first-quarter lead, then added to it on a 71-yard second-quarter bomb to Jay Parker. On the second play of the fourth quarter, he hit Eugene Minter from 28 yards out to help the Govs retake the lead, but his most daring gambit came on the Governors final regulation drive: on fourth-and-five from the Southeast Missouri 12-yard line late in the fourth quarter, Ellis stepped up and hit Harley again in the end zone, a score that forced Southeast Missouri into a touchdown-necessary position on the final drive.

In overtime, Ellis found Harley in the end zone twice–on the first time, on an 18-yard strike to tie the game after Southeast Missouri scored to open the extra session, the second time on a 22-yard strike on third-and-seven that ultimately proved to be the game-winning score for the Govs.

Culp turned his first start as a Gov into a career day at Southeast Missouri. The Charlotte native secured two first-quarter interceptions, with the first leading to the first of four Ellis-to-Baniko Harley touchdown strikes to get Austin Peay on the board in Cape Girardeau.


If he did nothing aside from the two picks—the first Gov since Kordell Jackson in 2019 with two interceptions in the same game—it would be notable and worthy of Player of the Week honors. But Culp wasn’t done; he would register six total tackles for the game, including a fourth-quarter tackle for loss, and broke up a pass in the fourth quarter as well.

Culp’s first honor from the league makes him the first Austin Peay State University freshman to earn Defensive Player of the Week honors since before Austin Peay returned to league play in 2007.