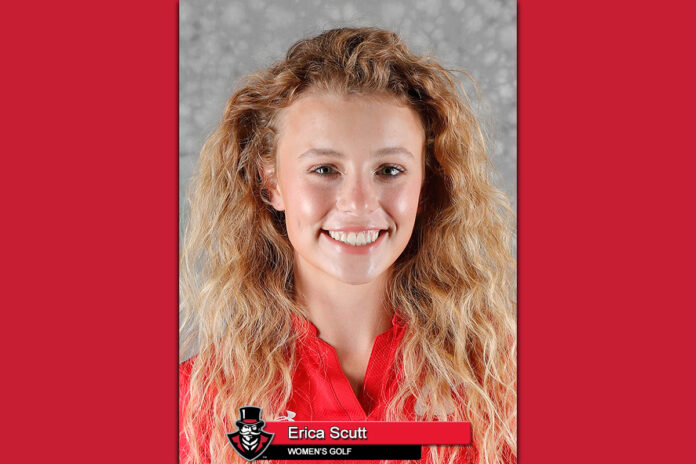 Brentwood, TN – After a pair of second-place finishes and a sixth-place finish during October, Austin Peay State University freshman Erica Scutt has been named the Ohio Valley Conference Women’s Golfer of the Month, the league announced Tuesday.

Scutt kicked off the month with a second-place finish at the Butler Invitational, shooting an even-par 210 to lead the Governors to their first three-round tournament title in program history.

The second-place finish at the Butler Invitational was the best by a Governors golfer since Reagan Greene‘s runner-up finish at the 2018 Citrus Classic. In addition, her 210-tourney total was the second-best aggregate in program history, only two shots behind Taylor Dedmen’s 208 at the 2019 Spring Break Shootout.

By shooting a 69 in the first and third round of the Butler invitational, Scutt joins Dedman – who shot a pair of 69’s at the 2019 Spring Break Shootout – as the second player in program history with two rounds in the 60’s at the same event. Both of Scutt’s rounds of 69 also are tied for the second-best 18-hole score in Austin Peay history.

The Alpharetta, Georgia native paced the Governors again at the Lady Red Wolves Classic, firing a two-under 214 en route to a sixth-place finish. Scutt then led the Govs to another team title at Tennessee State’s Town & Country Invitational, shooting a 144 in the two-round event to finish tied for second with fellow freshman Kaley Campbell.

Scutt led Austin Peay State University with two rounds in the 60’s and 5 rounds under par in October. In her eight rounds last month, she averaged 71 strokes and all counted towards the Austin Peay team score.

Scutt and the rest of the APSU women’s golf team will look to build off a strong fall campaign when they kick off their spring season at the Oyster Shuck Match Play, March 7th-8th, hosted by The Citadel in Mount Pleasant, South Carolina.