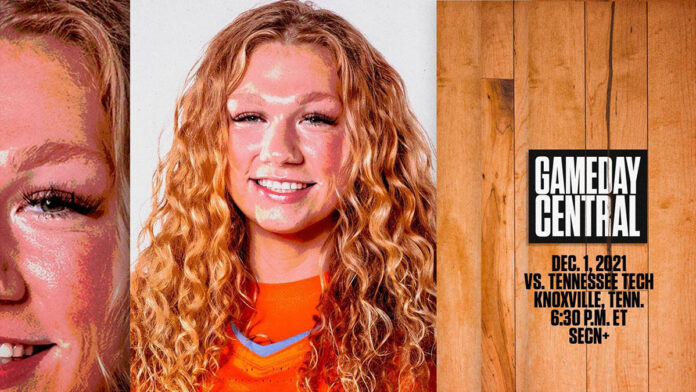 Knoxville, TN – No. 11/10 Tennessee women’s basketball team (6-0) begins a run of six home games out of seven contests in the month of December, welcoming Tennessee Tech (2-4) to Knoxville on Wednesday evening. The match-up will tip-off at 5:32pm CT at Thompson-Boling Arena.

After facing back-to-back American Athletic Conference foes in UCF and No. 23/22 South Florida, followed by Big 12 schools No. 12/21 Texas, Kansas, and Oklahoma State, the Lady Vols launch into a two-game series of battles with tech universities. After playing host to Tennessee Tech, the Big Orange women will make their way up I-81 to Blacksburg to take on Virginia Tech in Cassell Coliseum on Sunday at 1L00pm CT (ACC Network).

Tennessee is coming off a 2-0 showing at the South Point Thanksgiving Shootout in Las Vegas over the weekend, taking care of Kansas on Friday, 68-58, and outshooting Oklahoma State on Saturday by a score of 80-55. The Lady Vols continue to persevere and display consistent improvement after losing starters Rae Burrell and Marta Suárez to injuries.

Tennessee Tech, meanwhile, enters on a four-game losing streak after opening the year with wins over Bethel and Chattanooga. The Golden Eagles have since dropped decisions to two more in-state foes, Vanderbilt and MTSU, before falling to No. 25 Florida Gulf Coast and New Mexico State at the San Juan Shootout in Puerto Rico. All six outcomes were by double digits.

Roger Hoover (play-by-play), VFL Steve Hamer (analyst), and Kasey Funderburg (reporter) will be on the call for the SECN+ live stream.

Holiday Hoops – Get $5.00 tickets for all price zones (excluding courtside), available in advance or on game day, plus $1.00 tickets for kids 12 & under.

For more information about promotions, parking and fan information, please visit the Fans tab on UTSports.com and go to the Fan Experience page.

No. 11/10 Tennessee improved to 6-0 on the season, shooting 55 percent from the field to defeat Oklahoma State at the South Point Thanksgiving Shootout on Saturday, 80-55.

The Lady Vols, who opened with six straight wins for the second time in three seasons under Kellie Harper, were led by junior guard Jordan Horston, who narrowly missed a triple-double with 17 points, nine rebounds and nine assists. Junior center Tamari Key turned in a double-double with 12 points and 11 rebounds, and freshman guard/forward Sara Puckett and graduate forward Alexus Dye both tallied 11 points.

Horston and Key were both named to the South Point Shootout All-Tournament Team, and Horston was selected for the Most Outstanding Player award.

Taylen Collins and Lauren Fields were the high scorers for the Cowgirls (3-3) with 12 points each during a 30.9-percent shooting day for OSU.

Early Lead In The Big 12 and AAC
Tennessee improved to 3-0 vs. Big 12 Conference schools, taking care of No. 12/21 Texas, Kansas and Oklahoma State in succession. Prior to that, the Lady Vols defeated American Athletic Conference schools UCF and No. 23/22 South Florida in back-to-back contests to go 2-0 vs. that league.

Doubling Up
Tamari Key logged her third double-double of the season against the Cowgirls with 12 points and 11 rebounds to tie Jordan Horston for the team lead. A Lady Vol has logged a double-double in every game thus far this season.

Balanced Attack
Four Lady Vols turned in double-digit scoring (Horston, Key, Dye, Puckett), while 11 of 12 active players scored at least one point. After missing the opener due to injury, Horston has led Tennessee in scoring in all five contests after that.

Outshooting The Cowgirls
Tennessee had its best shooting effort of the season by far. The Lady Vols hit 54.7 percent of their field goal attempts, soaring past their previous best of 42.6 vs. Southern Illinois in the opener. Their 69.2 effort at the free-throw line also was a season best.

Owning The Glass
Tennessee out-rebounded OSU, 52-26. The Lady Vols have won the rebounding battle against every opponent this season, averaging 39.2 rpg. while holding opposing teams to 27.8 rpg. on average. UT posted 50+ rebounds vs. all three Big 12 schools it faced, including 56 against Texas, 55 vs. Kansas, and 51 vs. Oklahoma State.

After averaging 53.3 points per game in their first three contests, the Lady Vols have put up 74.0 ppg. over their past three match-ups, all against Big 12 schools.

UT’s season-high 80 points vs. Oklahoma State came after UT had its best shooting efforts from the field (54.7) and free-throw line (69.2).

After tallying only 53 points total in the first four games, UT’s reserves have produced a sum of 51 over the past two contests.

The Big Orange women averaged only 3.7 ppg. on fast breaks in the first three games, as opposed to generating 10.0 ppg. over the past three.

The Big Orange women are 11-4 in games decided by five points or fewer.

Following a 17-point effort vs. Kansas, Jordan Horston has scored in double figures in nine of her last 10 games, including four of the last five contests in 2020-21 and all five in 2021-22.

Horston has three double-doubles in five outings in 2021-22, ranking third among SEC players.

Alexus Dye leads the SEC among active players with 33 career double-doubles, including one this year.

UT is averaging 33.0 points in the paint per game, compared to 20.7 for opponents.

The UT Lady Vols rank No. 5 in home attendance average at 7,143 after welcoming the nation’s number two crowd this season with 9,460 on hand for the Texas game.

Tennessee women’s basketball leads the all-time series over the Golden Eagles, 16-12, but the two schools haven’t played since 1991.

The last time the schools faced one another in women’s hoops, the No. 3/3 Big Orange women rolled to a 94-67 victory at Thompson-Boling Arena.

Peggy (Simpson) Jolly and Pat (Head) Summitt played against one another on the hardwood when they represented their teams at Tennessee Tech and UT Martin, respectively.

Kellie (Jolly) Harper and her other brother, Ross, battled each other as head coaches earlier this season when Tennessee hosted Georgia College in an exhibition game.

Harper (1995-99) and Tennessee Tech head coach Kim Rosamond (1994-98) were competitors against one another as college players, as well, when they played at UT and Ole Miss, respectively.

Their paths also crossed on the court with UT assistant Samantha Williams, who played at Auburn from 1992-96.

The Golden Eagles welcome back all five starters and 12 total letterwinners from last season. That unit turned in a 15-10 overall record and 12-8 mark in Ohio Valley Conference play to finish fifth.

TTU, which was picked second in the OVC in the 2021-22 preseason poll, features a veteran quintet of four graduates and a junior in its starting lineup.

The Golden Eagles earned an unprecedented four selections on the preseason All-OVC squad, as the quartet of Kesha Brady, Jordan Brock, Mackenzie Coleman, and Anna Jones were all named.

Brock, Brady, and Coleman became the 31st, 32nd, and 33rd 1,000-point scorers in program history, while Brock also took the program record in 3-pointers made with 267 in her career.

About the Tennessee Tech Head Coach

Kim Rosamond is in her sixth season at Tennessee Tech and has compiled a 73-80 record during her time in Cookeville.

With 73 wins to her credit over a short span, Rosamond stands as the third-winningest coach in the Tech program’s rich history.

Prior to becoming the head coach at TTU, Rosamond spent time as an assistant at Vanderbilt, MTSU and Ole Miss.


Rosamond is a 1998 graduate of Ole Miss and was a four-year letterwinner in women’s hoops there.

The Tennessee Tech women’s basketball team made a valiant comeback on Saturday against New Mexico State, but the Aggies’ 20-point lead in the third quarter was too much to overcome, as the Golden Eagles closed out the San Juan Shootout with a 66-54 loss.

The Golden Eagles had three players score in double figures, led by Mackenzie Coleman and Anna Jones each with 13 points, while Jada Guinn had 12 points. Jones had seven of her points at the free-throw line, as she went 7-for-12 after drawing 10 fouls in the contest.

Tech spent a lot of time at the charity stripe, as the Golden Eagles drew 24 fouls and went 18-for-30 at the line. In addition to Jones’ seven points, Guinn was 6-for-8 on free throws.

Guinn and Coleman each had a team-best seven rebounds, while Coleman and Jones led Tech in assists as well.

The Tennessee women’s basketball team is in a stretch where it plays six games at home during the month of December.

After traveling to Virginia Tech for a 1:00pm CT contest on Sunday (ACC Network), the Lady Vols play host to Georgia State a week later on December 12th at 1:00pm CT (SECN+). That starts a run of five games in a row at home from December 12th to December 30th.