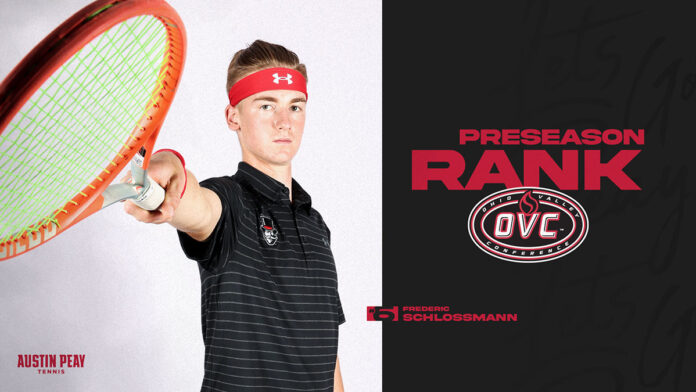 Brentwood, TN – Austin Peay State University (APSU) men’s tennis sophomore Frederic Schlossmann was named the No. 6 player in the Ohio Valley Conference Men’s Tennis Top 10 Player Rankings, and the Governors were picked third in the OVC’s preseason poll, as voted on by the league’s head coaches.

Schlossmann led Austin Peay State University with four wins across its top two singles lines last season. He also picked up a team-high three victories in the No. 1 doubles position, exclusively playing alongside Anton Damberg.  A Second Team All-OVC selection last spring, Schlossmann was a reliable piece in the Govs’ lineup throughout his freshman campaign.

Schlossmann followed his All-OVC spring with three doubles and four singles victories, which were each tied for team-high marks through the Govs’ three fall tournaments.

Schlossmann is the 16th student-athlete to be named a Preseason Top 10 selection under head men’s tennis coach, Ross Brown. The Govs have had at least one selection in the preseason poll in nine of 10 years under Brown, with Schlossmann being the team’s highest selection since Ozelis received a No. 2 ranking prior to the 2018 season.

Austin Peay State University’s third-place ranking in the preseason poll is a one-place improvement from their 2021 ranking. The APSU Govs received nine points in the preseason poll and are followed by Eastern Illinois (eight points) and Tennessee State (four). Tennessee Tech, who won the regular-season title last season, ranks atop the poll with four first-place votes and is followed by Belmont with one first-place vote.