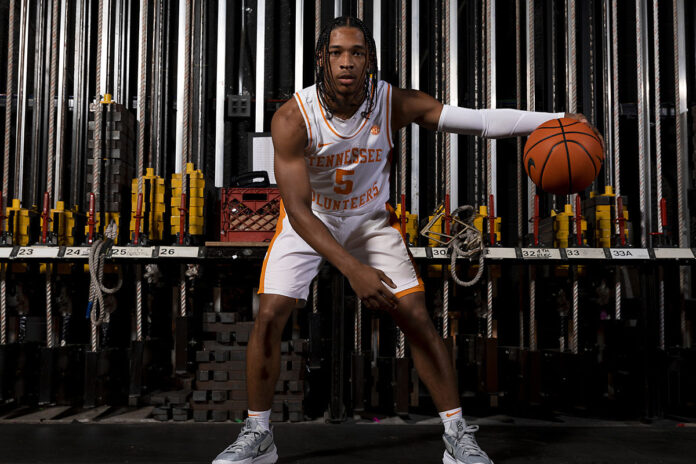 Knoxville, TN – The ninth-ranked and No. 2 seed Tennessee men’s basketball team is set to begin postseason action Friday in Tampa, Florida, taking on either South Carolina or Mississippi State at 5:00pm CT in the SEC Tournament quarterfinals.

No. 7 seed South Carolina faces No. 10 seed Mississippi State on Thursday at 5:00pm CT. The winner takes on No. 2 seed Tennessee on Friday.

Fans can catch Friday’s game on SEC Network and online or on any mobile device through WatchESPN. WatchESPN can be accessed through the ESPN App, or online at espn.com/watch. Tom Hart (play-by-play), Dane Bradshaw (analysis) and Alyssa Lang (reporter) will have the call.

Fans can also listen live on their local Vol Network affiliate to hear Bob Kesling and Bert Bertelkamp calling the action. A national radio broadcast is also available on channel 134 on Sirius, channel 190 SiriusXM and channel 961 on the SiriusXM app.

Freshman guard Kennedy Chandler sunk a career-high five 3-pointers, finishing with 15 points. Josiah-Jordan James put together yet another strong overall performance for the Vols with 12 points, seven rebounds and a team-high three steals.

Santiago Vescovi had a team-high-tying 15 points, while Zakai Zeigler had 13 points, a career-high six assists and five rebounds.

Following the conclusion of the regular season, three Vols also earned All-SEC honors. Vescovi was named first-team All-SEC, Chandler was included on the second-team All-SEC and Zeigler was selected to the SEC All-Defensive Team. Chandler and Zeigler also both made the SEC All-Freshman Team.

With a win Friday, Tennessee advances to the SEC Tournament semifinals on Saturday at approximately 2:30pm CT on ESPN (25 minutes after the conclusion of the first semifinal game).

Tennessee will face either South Carolina or Mississippi State Friday.

The Vols swept the home-and-home series with the Gamecocks this season and won their only meeting with MSU, in Starkville.

Should Tennessee advance to Saturday’s semifinals, it would face either Kentucky, Alabama, Vanderbilt or Georgia.

The Volunteers are 7-2 against the teams on their side of the bracket.

UT has won nine of its last 10 games and enters the SEC Tournament riding a four-game win streak.

Tennessee stands at No. 8 in the NCAA’s latest NET ratings. Each of UT’s seven losses are Quad 1.

The Vols have faced 11 AP Top 25 opponents so far this season and own wins over the teams ranked Nos. 2, 4, and 5 in this week’s poll.

According to KenPom, the Vols rank third in the nation in adjusted defensive efficiency, allowing only 87.4 points per 100 possessions.

Tennessee’s scoring defense of 66.4 ppg in SEC play was the best in the league. The Vols have held seven of their last nine SEC opponents to fewer than 65 points.

Tennessee also led the SEC in assists per game during conference play (14.9 apg).

Tennessee finished fifth nationally in average home attendance (18,202) and was a perfect 16-0 at Thompson-Boling Arena.

The Vols own the third-best SEC Tournament winning percentage among league schools, trailing only Kentucky (.832) and Alabama (.569).

This is the second time Tampa has hosted the SEC Tournament (same venue as this year).

As the East No. 1 seed in Tampa in 2009, Tennessee defeated Alabama and Auburn to advance to the championship game, where it fell to Mississippi State, 64-61.

This week marks UT’s first trip to the Sunshine State this season.

Rick Barnes is 38-32 (.543) in conference tournament games as a head coach. That includes a 7-5 record with Tennessee.

And the Vols are among just eight teams with at least eight regular-season Quad 1 victories. Three of those eight teams are from the SEC (Tennessee, Kentucky, and Auburn) and three are from the Big 12.

The SEC is the only league to conclude the regular season with at least three teams in the top 10 of the NCAA’s NET ratings.

The Vols’ defensive SCC% of 2.60 is a result of dividing the field goal conversions that occur five seconds or less after an offensive rebound by the total number of opponents’ missed field goals.

Tennessee’s active hands-on defense often leads to a block or strip steal after offensive boards by the opposing team.

Santi Seeing, A Big Rim, But Now More Than Just A Sniper

All-SEC first-teamer Santiago Vescovi’s 87 made 3-pointers already stand as the eighth-most ever by a Vol in a single season.

Vescovi is averaging 2.9 made threes per game.

KC Starring As A Freshman

Tennessee leading scorer Kennedy Chandler (13.7 ppg) was one of only four freshmen named to the coaches’ first or second All-SEC teams.

Chandler also was the first freshman in Division I this season to reach 300 points, 100 assists, and 50 steals.

The Memphis native is projected by multiple outlets as a first-round NBA Draft pick this summer.

True freshman guard Zakai Zeigler should be a high school senior, but he instead is an SEC All-Freshman Teamer and SEC All-Defensive selection.

He is just the fourth Vol ever to earn a spot on the SEC All-Defensive Team.

Zeigler was Tennessee’s fourth-leading scorer in SEC play (10.1 ppg) and ranked second on the team with 2.2 steals per game vs. conference foes.

Zeigler ranked third in the league with a .866 free-throw percentage in SEC games.

He twice exploded for 18 points in wins over North Carolina and South Carolina—two of his 13 double-digit scoring performances off the bench this season.

His mother, Charmane Zeigler, and his 4-year-old nephew, Nori—who she is raising—lost everything.

On March 2, with the assistance of Tennessee Athletics’ compliance office and administration, Zeigler launched a GoFundMe fundraiser. Tennessee fans responded in extraordinary fashion, collectively donating $363,027 in less than 24 hours before the fundraiser was closed.

Charmane and Nori are now considering permanently relocating to the Knoxville area.
Fundraiser proceeds in excess of what the NCAA ultimately allows the Zeiglers to retain will be donated to charity.

Tennessee is yet again the only school in America to rank in the top 10 in average home attendance for football, men’s basketball, and women’s basketball.