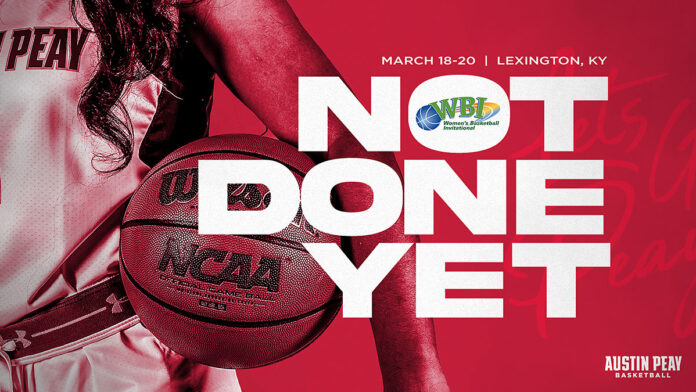 The Governors will play in the Women’s Basketball Invitational, March 18th-20th, at the Clive M. Beck Center, on the campus of Transylvania University, in Lexington, Kentucky.

Austin Peay (19-11, 11-7 Ohio Valley Conference) will open the WBI with a 1:30pm CT, Friday game against Saint Mary’s (California). The Gaels went 15-15 this season with a 9-9 mark in the West Coast Conference and fell to No. 9-seeded Loyola Marymount in their first game of the WCC Tournament.

The Govs are guaranteed three games at the WBI and will also play Saturday and Sunday in the eight-team tournament. Bowling Green, Furman, Davidson, Nevada, Cleveland State, and Northeastern will also play in the WBI. The winner and loser of the Austin Peay State University and Saint Mary’s game will play the winner or loser of Bowling Green and Furman.

The 2022 WBI will be the 12th edition of the tournament and Cleveland State is the reigning tournament champion. Austin Peay State University is the ninth OVC team to participate in the WBI and the first since Tennessee Tech advanced to the 2019 tournament’s quarterfinals. In their final OVC season, the Govs have a chance to be the first OVC team to win the WBI title

The WBI will be streamed at WatchWBI.com and will cost $10.00 a day for the streaming service.

“I am excited for our women’s basketball student-athletes to have the opportunity to earn a 20-plus win season and build on what has been a very good season,” said Austin Peay Vice President and Athletics Director Gerald Harrison. “Playing in the postseason will give Coach Young a chance to continue to rebuild our program as we look forward to the ASUN and returning to what our program once was.”


“It is a great honor to be invited to participate in the Women’s Basketball Invitational,” said Young. “We are thankful for the leadership of our Director of Athletics, Gerald Harrison, and our administration for their continued support throughout this season.  This would not have been possible without them.

“An expectation of our program is to play games deep into March and participating in the WBI is the first step in this process. We will continue to recruit student-athletes that have a great desire to compete and excel during postseason play. There are steps we must take in pursuit of becoming a championship-caliber program. I am looking forward to the continued growth of our players and for an opportunity to build on the foundation that we were able to establish this season.”

With 19 wins this season, the Governors have already posted their best single-season mark since the 2003-04 team won 23 games during their OVC Championship season. With three games guaranteed at the WBI, Austin Peay needs just a single win to reach the 20-win mark for just the fourth time in program history.

As a team, Austin Peay State University is shooting 45.6 percent from the field this season. The Governors have not shot over 45 percent from the floor in a season since the 2002-03 team set the single-season program record by shooting 47.4 percent.

The APSU Govs are led by First Team All-OVC selections Yamia Johnson and Karle Pace, who were the program’s first first-team selections since Keisha Gregory during the 2018-19 season. Johnson and Pace are also the first pair of Austin Peay State University players to receive All-OVC honors in the same season since 2009-10 and are the first duo to pick up First Team All-OVC honors in the same season since Gerlonda Hardin and Ashley Haynes in 2003-04.

Nina De Leon Negron has already dished out 101 assists this season and she is the first Gov to record 100-plus assists since Bri Williams (105 assists) during the 2017-18 season. With 94 assists this season, Ella Sawyer also has a chance to top the century mark in the WBI.

If Sawyer can reach the 100-assist mark, she and De Leon Negron would become the first Austin Peay State University teammates to record 100-or-more assists in the same season since Saundra Hale (111) and Ashley Haynes (107) during the 2005-06 season.

With the season ongoing, be sure to follow the Governors women’s basketball team on Twitter and Instagram (@GovsWBB) or check back at LetsGoPeay.com for the latest news and updates from the WBI.