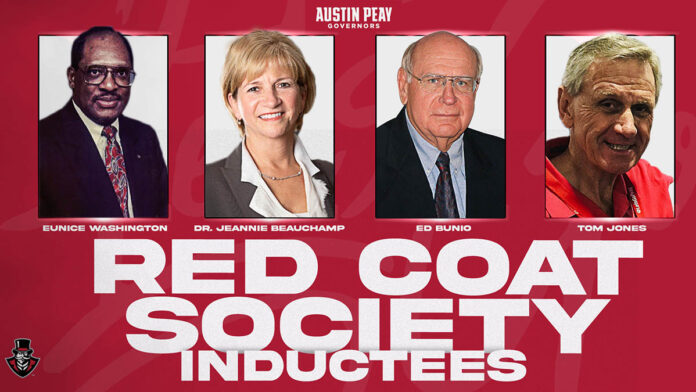 Dr. Jeannie Beauchamp, Ed Bunio, Tom Jones, and Eunice Washington will be inducted into the Red Coat Society as its 18th class. The society, which is a Hall of Fame for service to the Austin Peay Athletics Department, was established in 2004 to honor those individuals who have provided longtime support to Governors athletics.

Dr. Beauchamp has provided support to Governors athletics for more than 20 years. She has been instrumental in launching several fundraising initiatives for athletics which include golf tournaments, concerts, championship ring fundraisers, and basketball fundraising events. In 2019, she co-chaired a women’s football fundraising event and sponsored the pre-reception event for the 2019 OVC Football Championship recognition dinner. In addition, she became a gate sponsor at Fortera Stadium.

Ed Bunio (’65) played football for three seasons at Austin Peay State University and was a defensive coordinator from 1973-78, helping the Governors to their first Ohio Valley Conference football championship in 1977. A 2015 APSU Athletics Hall of Fame inductee, Bunio was among a group of former Governors athletes known as “Dupes Group” that was responsible for helping return Austin Peay football back to scholarship status.

Tom Jones (’67) also played four seasons of football for the Governors before becoming a State Farm insurance broker where he was employed for nearly 40 years. Along with Bunio, he was among a group of former Governors athletes known as “Dupes Group” that was responsible for helping return Austin Peay State University football back to scholarship status. Jones provided the lead gift and volunteered his time to raise funds needed to support scholarship football, including the creation of the Dupes Football Scholarship. He also is a donor and influencer for the naming of the Dupes Football Locker Room during the Fortera Stadium campaign.

Eunice Washington has been a constant presence at Austin Peay State University football and basketball games and has been supporting Austin Peay State University Athletics for more than 30 years. He joined the Govs Club in 1994 has and participated in fundraising events for basketball and football and served on the APSU Foundation Board as an Investment Committee member for several years before retiring in 2016. Eunice continues to support APSU Athletics through his financial commitments as well as attending athletics events.

To be eligible for the Red Coat Society, individuals must be a member in good standing of the Monocle Society or its predecessors for at least five years; have supported the athletic programs at Austin Peay State University through financial contributions or participation in Monocle Society fund-raisers and other events; have supported more than one sport both at home and away whenever possible and be recognized within the APSU community for their association with Austin Peay State University athletics.