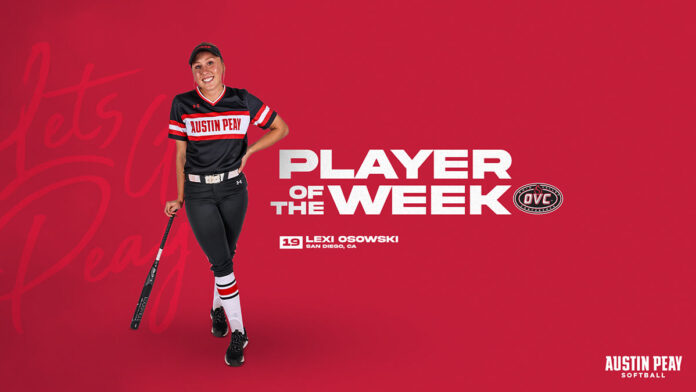 In the opening game of the series, Osowski reached base all four times, including scoring the go-ahead run in Govs 5-2 win, then added a two-run homer in her next at-bat.

In Game 2 of the series Osowski, scored twice in the 7-4 victory, including hitting her second two-run homer of the series.

In the series finale, she drove in the team’s lone run with an RBI double.

Overall, Osowski authored four hits in eight at-bats, while also drawing two walks and being hit by a pitch.

Osowski’s selection as the league’s Player of the Week is Austin Peay’s third this spring, marking the first time since 2019 that the team has had at least three selections in the same season, with freshman utility player Kylie Campbell taking the league’s top weekly honor, Feb. 14, and graduate student shortstop Brooke Pfefferle, February 28th.

With her second selection as OVC Player of the Week, Osowski becomes the sixth Governor in program history to be selected Player of the Week by the league at least twice in their career, joining Danielle Liermann (four times), Andrea Miller (three times) and Amanda Travis, Brianna Venable and Lauren de Castro (two times).

Overall, Osowski becomes the 27th Governor softball player to earn Player of the Week honors in the OVC, since they started bestowing the weekly accolade at the start of the 1994 season.