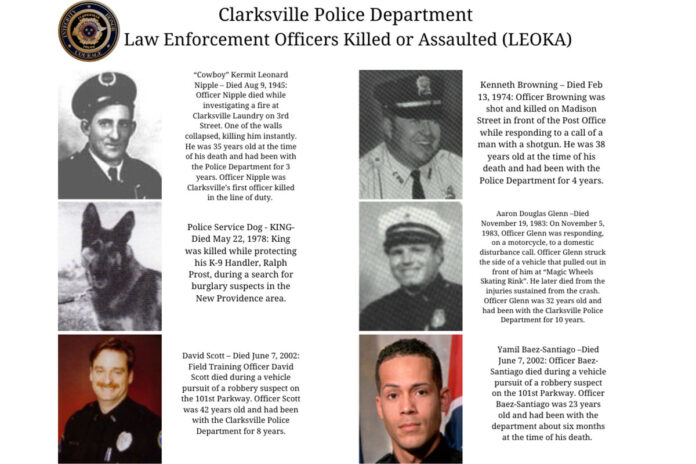 Clarksville, TN – The Clarksville Police Department (CPD) will be hosting the annual Law Enforcement Memorial Ceremony on May 13th, 2022 beginning at 10:00am. The ceremony will take place outside of CPD Headquarters, 135 Commerce Street, in front of the Clarksville Protector statue.

Please note, there is no inclement weather plan for this event, if the weather does not cooperate, the ceremony will, unfortunately, be canceled.

National Police Week is held each year to honor the service and sacrifice of U.S. law enforcement officers and will be observed  May 11th – 17th, 2022.  According to the Officer Down Memorial Page, (www.odmp.org/statistics).  The ODMP is reporting that there were 617 Line of Duty Deaths (LODD) in 2021.

In 1962, President John F. Kennedy signed a proclamation that designated May 15th as Peace Officers Memorial Day and each week in which that date falls as Police Week.  Law Enforcement Officers from around the world converge on Washington D.C. to participate in planned events which honor those that have paid the ultimate sacrifice.

On May 14th at 9:00am, the Sixth Annual Run for C.O.P.S. (Concerns of Police Survivors) will celebrate the 2022 National Law Enforcement Week with a fun, non-competitive, fitness event for the whole family.  The 5k will take place in Historic Downtown Clarksville starting at the Clarksville Police Department and going through the downtown area. This year Montgomery County Animal Care and Control will have adoptable dogs at the event for those who wish to walk a dog through half or all of the course. www.eventbrite.com/…/run-for-cops-tickets…

The Clarksville Police Department would like to remember the following Law Enforcement Officers Killed or Assaulted (LEOKA) in the line of duty:

“Cowboy” Kermit Leonard Nipple – Died August 9th, 1945: Officer Nipple died while investigating a fire at Clarksville Laundry on 3rd Street. One of the walls collapsed, killing him instantly. He was 35 years old at the time of his death and had been with the Police Department for 3 years. Officer Nipple was Clarksville’s first officer killed in the line of duty.

Kenneth Browning – Died February 13th, 1974: Officer Browning was shot and killed on Madison Street in front of the Post Office while responding to a call of a man with a shotgun. He was 38 years old at the time of his death and had been with the Police Department for 4 years.

Police Service Dog – KING- Died May 22nd, 1978: King was killed while protecting his K-9 Handler, Ralph Prost, during a search for burglary suspects in the New Providence area.

Aaron Douglas Glenn –Died November 19th, 1983: On November 5th, 1983, Officer Glenn was responding, on a motorcycle, to a domestic disturbance call. Officer Glenn struck the side of a vehicle that pulled out in front of him at “Magic Wheels Skating Rink”. He later died from the injuries sustained from the crash.  Officer Glenn was 32 years old and had been with the Clarksville Police Department for 10 years.


David Scott – Died June 7th, 2002: Field Training Officer David Scott died during a vehicle pursuit of a robbery suspect on the 101st Parkway.  Officer Scott was 42 years old and had been with the Clarksville Police Department for 8 years.

Deputy David “Bubba” Johnson –Died on January 12th, 2014 Deputy Johnson lost his life in a vehicle accident while on duty with the Montgomery County Sheriff’s Office. Bubba had previously served with the Montgomery County Emergency Medical Service and the Clarksville Police Department.  Deputy Johnson was 52 years old and had a cumulative service record of 27 years at the time of his death.

We would like to take time to remember all of the law enforcement personnel who passed away over the years who dedicated their life serving others.