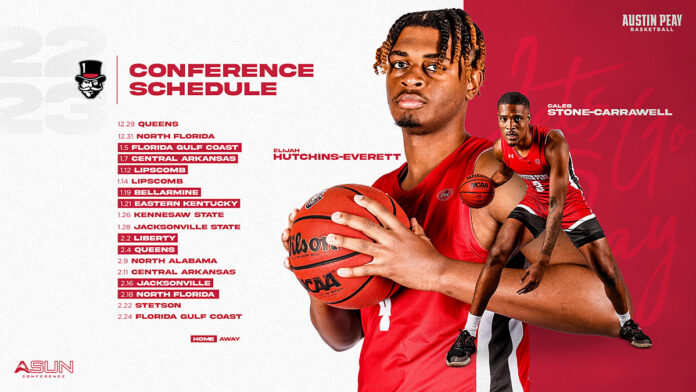 The 18-game conference slate will feature nine home games with intriguing regional match-ups against Lipscomb, Bellarmine, and Eastern Kentucky. All dates are subject to change with game times to be announced at a later date.

The APSU Govs kick off ASUN play on the road, on December 29th against fellow newcomer Queens University of Charlotte. It will be the first-ever meeting between the two programs. Austin Peay State University continues its road swing with a New Year’s Eve battle at North Florida, on December 31st. Last season the Govs fell to the Ospreys, 91-84.

Austin Peay State University begins the new year at home with its ASUN home opener against Florida Gulf Coast, on January 5th. Thursday’s contest will the Eagles marks the first of a three-game homestand for the Govs, squaring off with Central Arkansas, on January 7th before hosting in-state foe Lipscomb, on January 12th. APSU stays in the home state as the Govs and Bisons tangle in Nashville, on January 14th.

The APSU Govs end January with a pair of home games against Bellarmine (January 19th) and Eastern Kentucky (January 21st) before hitting the road for two straight at Kennesaw State (January 26th) and Jacksonville State (January 28th). To begin February Austin Peay State University hosts Liberty, on February 2nd. The Flames are led by guard Darius McGhee who last season was named ASUN Player of the Year for the second consecutive season.

Following its contest with Liberty, the Govs host Queens University of Charlotte, on February 4th before back-to-back road games at North Alabama (February 9th) and Central Arkansas (February 11th). The final homestand of the regular season begins February 16th when the Govs square off with Jacksonville. In its home finale, APSU will meet North Florida, on February 18th for its second meeting of the season.

Rounding out the ASUN Conference schedule, the Govs will travel to DeLand, FL, for a match-up with Stetson, on February 22nd. It will be just the second time in school history APSU has traveled to Stetson. The conference slate concludes on February 24th at Florida Gulf Coast.

The 2023 ASUN Conference Men’s Basketball Championship will be held February 27th – March 5th at campus sites with the top seeds hosting each successive round of the event. Teams will be reseeded following the quarterfinal contest. The 2023 edition of the tournament marks the 44th year that the league will host the Championship.

Home Games are in Bold