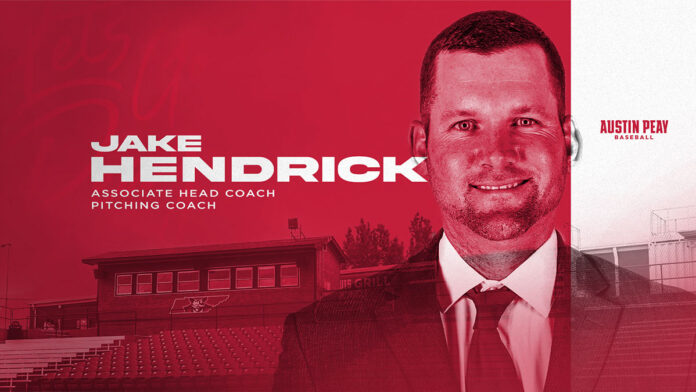 “Getting Jake Hendrick on staff is an absolute home run for our program,” said Fanning. “I’ve known Jake for 10 years and all he does is make people better. As a head coach, Jake is coming off the best season in school history! The fact he is willing to sacrifice being a head coach shows his unselfishness, high-level character, and that he wanted to be at Austin Peay.

“Jake has recruited and developed many All-Americans and draft picks, including one of the most dominant relief pitchers in all of baseball in current Major League All-Star Ryan Hesley. This guy can coach, he wants to win, and he will bring a new edge to our program. I personally can’t thank Jake, his wife Danielle and their three boys – Cooper, Cade, and Carson – enough for wanting to be a part of this.”

“I’m very excited to be joining Austin Peay baseball,” said Hendrick. “This is a great move for me and my family. It will be fun to see my three boys running around ‘The Hand’ in their red and white! I can’t wait for August to get here and get rolling with the team.”

Hendrick, originally from Naperville, Illinois, recently completed his seventh season as head coach at Division II Northeastern State in Tahlequah, Oklahoma. He led the RiverHawks to a back-to-back second-place regular-season finishes in the Mid-American Intercollegiate Athletic Association in his final season.

Last season, the Riverhawks were selected to their first-ever NCAA Division II Baseball Championship and also earned their first-ever national ranking during the season and finished the year with a 38-18 overall mark. NSU was led by a pair of Consensus Division II All-Americans in MIAA Player of the Year Brock Reller and Blake Freeman. Northeastern State also was the only team in Division II to finish the season with 120 or more home runs, doubles, and stolen bases.

In 2021, Hendrick earned MIAA Coach of the Year honors after leading Northeastern State to a 23-10 MIAA record, which formed the bulk of their 40-game regular-season slate, and second-place finish in the league.

Prior to the pandemic, the RiverHawks posted a 28-win season – their most wins since 2002 – while playing Division II’s seventh-toughest schedule. That team was led by pitcher Ben Strahm, who was selected in the 23rd round of the 2019 MLB Draft by the San Francisco Giants.


Hendrick took over the RiverHawks program in 2016 and promptly led the team to its fourth-consecutive trip to the MIAA tournament thanks to a 27-23 record. NSU was 22-25 in his second season as the head coach.

Prior to becoming head coach, Hendrick was a pitching coach at NSU for two seasons (2014-15). The 2015 RiverHawks pitching staff became the first in program’s NCAA history to post a sub-5.00 ERA (4.86) while setting a program record with 350 strikeouts.

He coached pitcher Ryan Helsley who became NSU’s highest-ever drafted player when he was selected in the fifth round of the 2015 MLB Draft by the St. Louis Cardinals. Helsley needed just four years to reach the majors, debuting with the Cardinals in April 2019.

Hendrick began his coaching career at Stillwater High School where he was an assistant for three seasons (2009-12). He helped lead the Pioneers to a state tournament appearance in his final season. Hendrick then moved to the junior college ranks as an assistant coach at Marion Military Institute in Alabama for a season (2013) before joining the Northeastern State staff for the 2014 season.

In addition, Hendrick coached two seasons in collegiate summer leagues. In 2012 he was the pitching coach for the Winchester Royals of the Valley Baseball League which won the North Division regular-season title and pennant en route to the Lineweaver Cup Playoffs. The following summer he was an assistant coach for the Charles Town Cannons of the Valley Baseball League which finished second in the North Division.