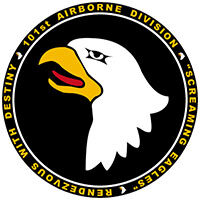 Throughout his 29-year Army career, Harbour distinguished himself as a dedicated leader and strong advocate whether leading Soldiers during combat operations in the Middle East or serving as the garrison’s senior enlisted adviser.

“You have always supported the Soldiers and their Families, you helped the units leverage the civilian workforce so we could better serve their needs,” said Shawn Pollack, Directorate of Human Resources director, during a recent civilian workforce town hall.

A Screaming Eagle at Heart

No matter where he travelled, Harbour always felt a strong connection to Fort Campbell and hoped he could eventually return. That opportunity came in 2007 when he began serving as a platoon sergeant for 1st Squadron, 75th Cavalry Regiment, 2nd Brigade Combat Team, 101st Airborne Division Harbour’s time with the Widowmakers included a combat mission in Iraq.

Since then, with his family at his side, Harbour has remained at Fort Campbell serving in several leadership roles, including 2nd Battalion, 502nd Infantry Regiment, 2nd Brigade Combat Team where, in 2012, he assumed duties as Warrior Transition Battalion first sergeant.

From there, Harbour was assigned to the 1st Battalion, 327th Infantry Regiment, 1st Brigade Combat Team, 101st Airborne Division. He was then selected to serve as the battalion command sergeant major for the 2nd Battalion, 506th Infantry Regiment, 3rd Brigade Combat Team from January 2018-February 2020 before becoming the garrison senior enlisted adviser in May 2020.

From Leading Soldiers to Leading Civilians

“Coming to the garrison was a leap of faith for me,” Harbour said. “I had no clue what a garrison did, all I knew was it kept me at Fort Campbell.”

U.S. Army Garrison-Fort Campbell consists of approximately 8,000 civilian and contract employees and 26 active-duty Soldiers, who support day-to-day operations on post. After decades as an infantryman, Harbour knew he needed to adapt his leadership skills to succeed within the garrison’s primarily civilian workforce.

“You’re not always going to have the best answers, but it’s how you communicate your insight into what your team feels the problem is,” he said. “You’ve got to be willing to go out and show praise because the professional civilian workforce on Fort Campbell never gets the praise they deserve, and early in my tenure I saw that.”


Planning for the Future

Harbour intends to take his time finding the best path forward following retirement. For a career Soldier, finding the right job and the right culture fit is stressful, he said. Although he has the ability to jump right into the civilian workforce, he’s thoughtfully choosing his next opportunity to serve.

“You live such an active lifestyle in the military, and I don’t think it’s good to completely unplug,” he said, noting that he plans to stay in the Clarksville area. “Even if it means I’m just going out and volunteering to help the community and giving back, maybe that’s where my calling is. We’ll find out after the first of the year.”