U.S. Army improves quality of care, services for Soldiers in 2022 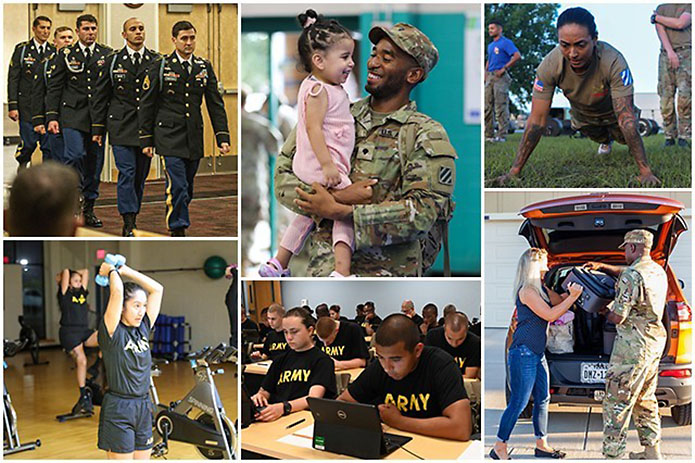 This year, to meet the needs of an evolving Army, policies have been reexamined and programs changed to improve quality of life for the force.

An important part of maintaining quality of life in the Army is fostering the esprit de corps within the service. In 2022, the Army recognized the dedication of Soldiers for their contributions to the Army as well as standing out among their peers during competitions — including the inaugural Best Squad Competition.


For each of the categories, Soldiers or their squads must demonstrate key tasks or conditions laid out in the award’s description.

For the Best Squad Competition for NCO and Soldier of the Year, the squad and Soldiers must prove their dedication to the Army values, embody the squad ethos and represent the force of the future.

The Drill Sergeant of the Year competitors have to show their mastery of all tasks and drills from Basic Combat Training: to be the best in training Soldiers on top of other physical and mental demands.

The top Army recruiters are awarded the Recruiter of the Year award, which tests their knowledge and professionalism. The Career Counselor of the Year must complete an Army Fitness Test, a 50-question exam, a 750-word essay, and board attendances.

This year the Army improvements focused on quality of life for the current force and strengthening its ability to recruit Soldiers who can meet the Army standards. The culmination of initiatives is just part of the larger plan to transition toward the Army of 2030.

As the Army makes changes to policies and programs to enhance the quality of life within the Army, it also must look outward to enhance its recruiting efforts and support those who wish to serve. This year, the Army created a new program designed to assist potential recruits to meet enlistment standards.

The Future Soldier Preparatory Course program, which had its pilot debut in August at Fort Jackson, South Carolina, provides an educational and training opportunity to help overcome barriers to entry for people wanting to serve in the Army.

The course has already trained almost 2,000 potential recruits, who have moved on to basic training.

The course was made in response to the rise of young recruits who are not able to meet the Army enlistment standards. Only 23% of young Americans meet the Army’s requirements.

Part of the program requires that the potential recruits take the Occupational Physical Assessment Test to qualify for the physical demand level required for an Army MOMilitary Occupational SpecialtyS  prior to their participation in the preparatory course.

Maintaining the all-volunteer force is one of the highest concerns to the Army, and part of the need comes from getting new Soldiers into the ranks. One of the barriers to entry into the Army was the previous tattoo policy.

To cut down time needed for a potential Soldier to enlist, Secretary of the Army Christine E. Wormuth updated a directive that allows recruits and Soldiers to receive tattoos on their hands, the back of their ears and the back of their necks.

Soldiers are now permitted to have one tattoo on each hand and behind each ear if the tattoos are no more than one inch in length. Soldiers can also have a tattoo on the back of their neck that is no more than two inches long. On top of those revisions, Soldiers may get tattoos between their fingers so long as they’re not seen when their fingers are closed.

Before the release of the updated policy, prospective recruits had to obtain a waiver that would delay entry to service and in some cases were even denied, both of which negatively impacts the recruiting process.

There have been no other changes to the policy; tattoos that were prohibited or needed a waiver before — save for the reasons above — will remain that way.


This change to the policy was implemented due to the growing popularity of tattoos. According to Training and Doctrine Command, 41% of 18 to 34-year-olds have at least one or more tattoos.

For those currently in the ranks, updates to older directives to improve quality of life were necessary to ensure Soldiers and their families were taken care of during and after pregnancy.

The directive, which has 12 parts, is a culmination of Soldier feedback and updates to existing policies. Before, the policies were spread across 20 Army regulations. This directive brings all those policies and updates under one document.

For the more than 46,000 Soldiers and 55,000 family members in the force, the Exceptional Family Member Program is a crucial tool for managing the care of a spouse or child with special needs. But the previous version of the enrollment process took weeks to get through and required Soldiers to fill out and retain an array of printed documents.


To improve upon the process, the EFMP went to using a web platform as opposed to the antiquated pen and paper method. Current and future clients can now go online to fill out their profiles and make updates.

The new method is designed to modernize enrollment, which will make assignment coordination and support easier and ensure the safe and secure upload of documents with sensitive information.

The permanent change of station process is a familiar part in the lives of Soldiers and their families, moving to a new duty station once every few years. These moves can be very difficult to manage. On top of these stresses, the lingering logistical impacts of COVID-19 still makes moves difficult to this day.

To combat these difficulties, the U.S. Transportation Command, U.S. Army and the Army Sustainment Command are making improvements to the PCS process.

Adjustments to domestic and international transit times were made to provide more predictability and expectation management for Soldiers and their families.

In 2020, ASC supplied tablets to quality assurance inspectors to assist them in the field — reaching more customers and quickly providing them with resources, handouts and report findings without requiring a return to their office.

ACS also laid out the improvements and implementations they’ve made to the PCS process.


They moved toward a more digitalized method of record keeping, refined the choice of move day, facilitated better communication with moving companies for Soldiers and their families, simplified claims by creating a standardized form, created a notification process if seals on containers are broken, refined overall communication with the service provider, allowed more time to file claims, increased reimbursement to 100% of do-it-yourself moves and extended reimbursement up to seven days of per diem and incidentals when a moving company fails to pick up or deliver as agreed.

Additionally, one more change is the introduction of SmartVoucher, which reduces travel payments to less than two days.