HomeNewsPatients line up for care in Sherzad
News

Patients line up for care in Sherzad

He didn’t hear the rooster’s crow in his small village that morning. In fact, he doesn’t hear much any morning.

Alam, a white-bearded man approaching 65 years old, has had hearing problems for as long as he can remember.

Yet, the frail Afghan, who walks with a cane, travelled several kilometers to the Mannakhil Comprehensive Health Care Center next to the Sherzad District Center in eastern Afghanistan’s Nangarhar Province to get checked out by combat medics assigned to 1st Squadron, 61st Cavalry Regiment, Task Force Panther, and their Afghan National Army counterparts.

The Soldiers brought medication, worked side by side with Afghan doctors and held an informal clinic for the villagers who travelled from villages throughout the region to receive aid.

“I came here to get some medicine,” said Alam, his voice raspy and hoarse from yelling constantly due to hearing loss. “We are happy to see the U.S. and ANA soldiers here because we need help.”

Dr. Mohammed Deen, director of the clinic, agreed with Alam.

“The people are happy when U.S. and Afghan doctors work together,” said Deen, who studied medicine at Nangarhar University’s Medical School. “They are most happy for the medicine we can give them.”

Men, women and children lined up outside the small clinic compound waiting to be screened by ANA combat medics in the courtyard before being led into one of the examining rooms. 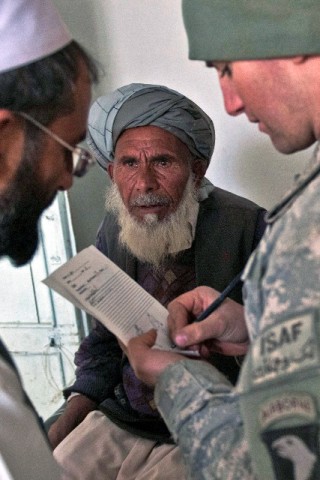 “I’m going to take your blood pressure one more time,” said U.S. Army Sgt. Robert A. Serrano as he rolled up Alam’s sleeve to reveal a wiry arm.

As Serrano checked his diagnostics, he conferred with Deen about the status of the patient.

“He’s hypertensive, too? For how long? Do you know?” Serrano said to Deen.

Most of the patients came to the clinic in poor health because of lack of nutrition and lack of proper medical care, added Serrano, a combat medic and native of Staten Island, NY, from Troop B.

“They seem pretty happy to see us and get treatment,” he said. “Yet, the most important thing it does is put us all on the same level. We’re people just like they are, and we don’t think we’re above them. We’re here to actually help them out.”

“Everyone thinks an American doctor is a super doctor, and we have the magic pill for everything,” said Serrano. “So when they see us working side by side with Afghans, they have faith that their doctors are just as good as us. For the coalition, it definitely puts some trust in us because we haven’t been here for quite a while.”

Many of the villagers haven’t interacted with U.S. Soldiers this closely before, explained Alam.

“Putting that human face on us,” Serrano said. “We’re not just a bunch of machines running around out there shooting everything and blowing things up. We’re actually people.”

After spending about 15 minutes with their Afghan patient, Serrano and Deen decided on their best course of action for treatment. 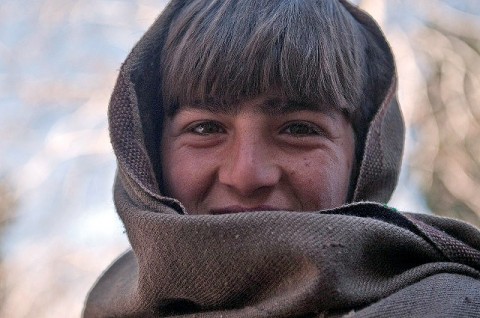 “There’s not a lot we could really do,” said Serrano. “He had some hearing problems with pain. We gave him some pain meds and some multivitamins. The reason for the multivitamins was not so much as a placebo, but it will still help his current health status. Anything we can do to try to help these people out without blowing them off.”

Taking only a few moments to show some genuine interest and concern might be all it takes to help change one villager’s perception, added Serrano.

“I hope they’re going to say, ‘Let’s not help out the Taliban, let’s help (coalition) forces because they’re helping us and not destroying our roads,’” said U.S. Army Pvt. Brandon A. Potvin, a combat medic from Charlotte, NC, assigned to Troop C. “I hope that’s the message they’re bringing back to their families and friends.”

Whatever message Alam and the other villagers bring back, they also brought back plenty of medication, hope and candy for the children.

“It’s good that we can bring some happiness to their day and make it that much better with just a piece of candy and some medical care,” said Potvin.

As supplies began to run low, the line continued to grow.

Serrano explained that there just wasn’t enough medication to give to everyone in the area and that was the sad part. 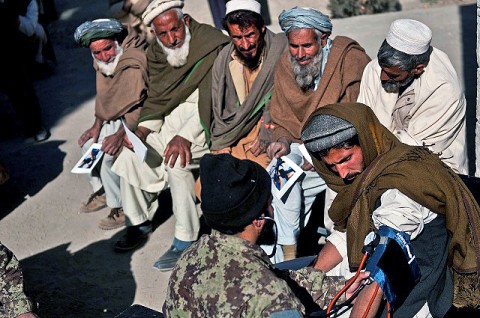 “It’s Christmas, and I’m cold, tired and hungry,” added Serrano. “But I’d rather be doing this than anything else. It’s a great job. It makes me feel happy that I’m a medic for one. Others don’t get the chance to do such things and talk to people. We’re actually doing something to make it work.”

As Alam slowly hobbled down the rocky, unpaved road back to his village, the clinic closed its doors for the day. Soldiers shook hands and shared smiles with the Afghan doctors as they put their gear back on.

Just then, another elderly man stuck his head in the door and spoke to Deen in Pashtu.

Deen waved him inside the examining room and the man took a seat holding his head.

Serrano looked at the man, set his gear back down, pulled out a piece of paper and said, “We seeing one more?”