Fort Campbell, KY – Two hundred and ninety soldiers from the 3rd Brigade Combat Team of the 101st Airborne Division arrived home shortly after 11:30am yesterday morning. The soldiers were returning from a year long deployment to Afghanistan as part of the Global War on Terror.

“Deployments always suck” said Ashley Angell, the girl friend of one of the returning Rakkasans. “It’s always the same thing”.  She was waiting for the flight to arrive with the soldiers mother Pamela Smith, and his six year old sister Kylie.  Their soldier had told her that he was looking forward to a good meal at Shogun Restaurant, and a ice cold beer.

Chelci Tedford was feeding her 4 month old daughter Jordyn as she waited for her husband Jace to arrive home. “He has not seen his daughter since she was a week old.” she said. He had been able to spend a few days at home for the birth. Then less than a week later he was forced to leave his wife and new born daughter to return to the combat zone.

Fifteen minutes before the plane was due to arrive, the families headed out on the tarmac where they would wait in the frigid winter weather. They huddled close together discussing plans for resuming their lives together which had to be put on hold during the deployment.

The plane was sighted by a sharp eyed little girl who pointed and excitedly exclaimed “There it is!”, the cry spread and the assembled family members began to cheer wildly.  Many were holding up signs and banners showing their support for their loved one. Others were waving tiny American flags a visible sign of their patriotism 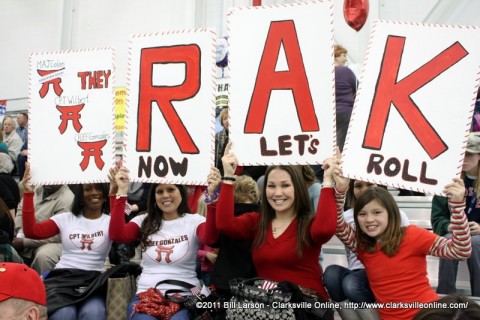 The cheers got even louder as the plane touched down in a blizzard of wind blown snow. The most poignant moment was when I overheard a young wife exclaim with heartfelt emotion, “He is really back home with me!”

The plane pulled to a stop on the tarmac. The boarding stairs were pushed up to the plane. The door opened and one man stepped out to the renewed cheering of the crowd. He began walking down the stairs. A short distance behind him the other soldiers started to emerge.

As they walked to the assembly area the soldiers faces hungrily scanned the crowd looking for their first glimpse of their loved ones. As they found each other faces lit up with the sheer joy of the moment.

Heading back inside the families waited for the pomp and ceremony that had to occur before they would be given a few moments together before the soldier had to leave once again to turn in their gear and debrief.

This was the second welcome home ceremony for the 3rd Brigade Combat team this month. Another  flight is due in on Friday, and two more on Saturday.The entire unit is expected to be home by the end of March.  They are the vanguard for the return of the entire 101st Airborne Division, which should be home by the end of June. On Sunday evening elements of the 717 EOD are due in.