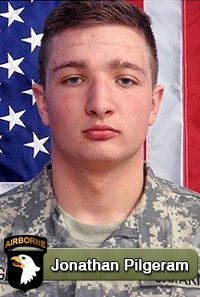 Pilgeram is survived by his father Rodney L. Pilgeram and mother, Roberta L. Pilgeram both of Great Falls, MT.

Fort Campbell holds a monthly Eagle Remembrance Ceremony to honor fallen Screaming Eagles. The next ceremony will be held March 9th at 4:00pm at the Family Resource Center. A memorial service will be held for Spc. Pilgeram in Afghanistan.