Mr. Rumsfeld has been visiting military bases nationwide to promote the sale of his book which reached the #1spot on the New York Times Best Seller List. Proceeds from the sale of the books go to charities supporting those serving in the military and their families. 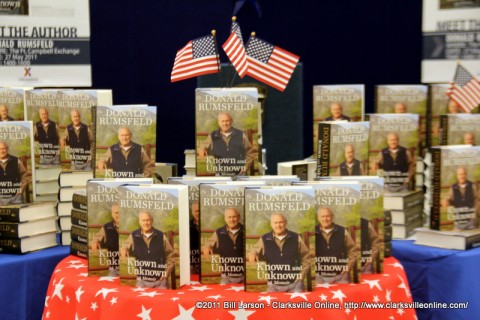 Rumsfeld was the U.S. ambassador to NATO from 1973 to 1974 and later chaired the transition to the presidency of Gerald Ford, becoming his chief of staff.

Prior to this, Rumsfeld served as a U.S. congressman from Illinois from 1963 to 1969. During his fourth Congressional term, Rumsfeld resigned to join President Nixon’s cabinet, where he served successively as the director of the office of economic opportunity, director of the economic stabilization program, and counselor to the president.

He has served as chief executive officer of two Fortune 500 companies and throughout his business career continued public service as chairman of the U.S. Ballistic Missile Threat Commission and chairman of the Commission to Assess United States National Security Space Management and Organization.

About his book Known and Unknown

With the same directness that defined his career in public service, Rumsfeld’s memoir is filled with previously undisclosed details and insights about the Bush administration, 9/11, and the wars in Afghanistan and Iraq. It also features Rumsfeld’s unique and often surprising observations on eight decades of history: his experiences growing up during the Depression and World War II, his time as a Naval aviator; his service in Congress starting at age 30; his cabinet level positions in the Nixon and Ford White Houses; his assignments in the Reagan administration; and his years as a successful business executive in the private sector.

Rumsfeld addresses the challenges and controversies of his illustrious career, from the unseating of the entrenched House Republican leader in 1965, to helping the Ford administration steer the country away from Watergate and Vietnam, to bruising battles over transforming the military for the 21st century, to the war in Iraq, to confronting abuse at Abu Ghraib and allegations of torture at Guantanamo Bay.

Along the way, he offers his plainspoken, first-hand views and often humorous and surprising anecdotes about some of the world’s best known figures, from Margaret Thatcher to Saddam Hussein, from Henry Kissinger to Colin Powell, from Elvis Presley to Dick Cheney, and each American president from Dwight D. Eisenhower to George W. Bush.

Rumsfeld relies not only on his memory but also on previously unreleased and recently declassified documents. Thousands of pages of documents not yet seen by the public will be made available on an accompanying website.

Known and Unknown delivers both a fascinating narrative for today’s readers and an unprecedented resource for tomorrow’s historians.

Proceeds from the sales of Known and Unknown will go to the veterans charities supported by the Rumsfeld Foundation.

“I would heartily recommend it. I don’t think anybody could go buy a book written by anybody who has been more intimately involved, closer to power, for as many years, has been through as much, has known all of the power players as you have. It is amazing.” -Rush Limbaugh (interview transcript)/2/8/2001

“Readers might be appreciative to find themselves in possession of a serious memoir, more in keeping with the older Washington tradition of Dean Acheson or Henry Kissinger. As might the historians.” -Kimberly Strassel/Wall Street Journal/2/8/2011

“The battle is joined. After a long silence, Donald Rumsfeld opened both barrels Tuesday, releasing his memoir, Known and Unknown . Early leaks of the book’s defiant take on his life, times, and conduct of the Iraq War drew howls from some of the targets of his score-settling…But Rumsfeld battles on, taking his unapologetic account to the public.” -John Barry/Newsweek-The Daily Beast/2/8/2011

“The book places the reader in Rumsfeld’s chair and is a serious stab at telling the history of a consequential period in America through the eyes of one of its most consequential players. It will be an important addition to the history of our time.” -Peter Baker (New York Times White House correspondent)/Foreign Policy/2/9/2011

Rumsfeld “describes the highs and lows of a long and dramatic career and discloses some behind the scenes details that may shock you.” -Sean Hannity (interview transcript)/2/9/2011

“Known and Unknown is a meaty, well-written book that will be a primary source for historians…this power memoir deserves to be read with the care that went into writing it.” -Christopher Buckley/Businessweek/2/10/2011

“‘Dismissive’ is a word often used to describe Rumsfeld, but ‘dismissive’ perfectly describes his critics, who are unwilling or unable to re-examine their own assumptions in the light of new or overlooked information and fresh perspective provided by Rumsfeld, in his exceedingly well-documented work. With its hundreds of annotations and supplementary documents, Known and Unknown is a significant contribution to the historical record. It is, as Rumsfeld once noted about similar memoirs, ‘only from one perspective,’ but it’s a unique and valuable perspective, a serious work that deserves consideration by any serious student of recent history.” -Jamie McIntyre (former CNN Pentagon correspondent)/Line of Departure/2/10/2011

“It is a terrific book…Let me tell you something, it is absolutely fascinating. He’s very blunt in talking about people and issues and so forth, you’ll really enjoy it, in my humble opinion.” -Mark Levin (interview transcript)/2/10/2011