Although the appearance is new to this Colombian team, Ariza is one of several players that participated in the U-20 Women’s World Cup, last summer, also in Germany. Ariza also was a key player in the U-17 team’s run in 2008.

Both Tatiana and Natalia Ariza were invited to attend camp for the Colombian team in part due to their participation with the U17 and U20 teams. In fact, during the U17 World Cup, Tatiana was the team’s Most Valuable Player and the leading goal scorer during the tournament.

Tatiana played in two of the preliminary matches as the Colombians defeated Denmark in penalty kicks, lost to New Zealand and defeated Wales, 3-1. Natalia made the it to the final 23 players, but missed on making the final cut.

Ariza and Colombia were assigned to Group C, along with Korea DPR, Sweden and the United States. While the Americans are the clear favorites to win the Group, Sweden also is steadily in the mix. The Colombians are touted as a surprise team after finishing second to Brazil in the Conmebol section to make their first-ever run at the final stages. 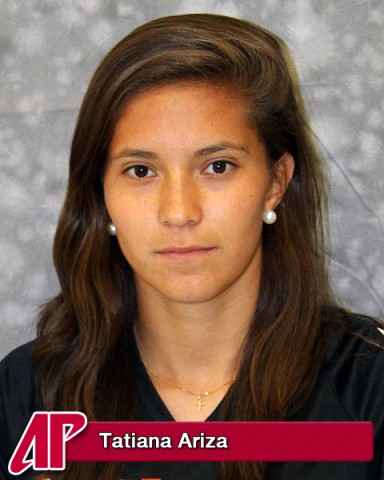 “Tatiana has an incredible amount of experience playing at a high level,” Austin Peay head coach Kelley Guth said. “We expected her to compete for a spot on this team and we’re just excited for her to be representing Austin Peay soccer on the world’s biggest stage.”

Ariza became Austin Peay’s first-ever Ohio Valley Conference Freshman of the Year, leading the Lady Govs to their the OVC Tournament Championship game in 2010. Without question, she is the most dynamic offensive player in Austin Peay history – scoring nine goals in recording four assists.

The most impressive aspect of Ariza’s game is her ability to perform in the clutch. Six of her nine goals came as gamewinners and three came in OVC play.

“I just play the game in the best way to help the team,” Ariza said before leaving to attend World Cup camp in early May. “If I draw defense, I know I have players I can pass too in order to score. If I have a chance to make a move to beat a defender, I know my team has confidence in me to get that done.”

Guth also will representing the Lady Govs at the World Cup, as the Lady Govs long-time head coach will be attending the games in Germany. Austin Peay fans can follow the action at www.LetsGoPeay.com through Guth’s ongoing blog from the tournament.