The Govs will practice two days—Tuesday and Wednesday—in shorts before putting on the pads this weekend.

“Just to get back on the field is exciting,” APSU coach Rick Christophel said. “The way we ended the season with the losses to Murray (State) and (Tennessee) Tech, it left a sour taste in our mouths.

Coming off a 3-8 season, the Governors return nine starters on defense and seven more on offense, plus both their kicker and punter. 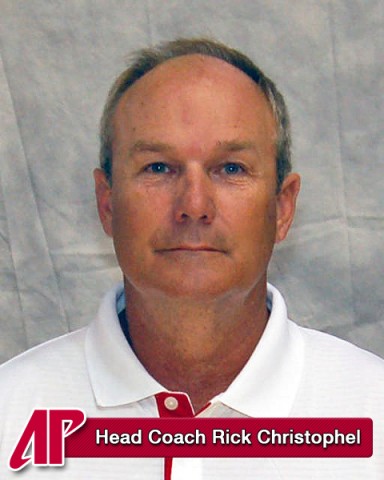 “We are not trying to find as many to play positions, but we do have good competition,” Christophel said. “I think competition builds success—players attempting to compete for the same job. We have some interesting battles, for instance, shaping up on the offensive and defensive lines.

Up front on the offensive line, the Govs must replace three starters, including both tackles and center Tim Schmid. They also will have a new coach, Jason Palermo, who replaced Tyler Trent a little more than a week ago. If the younger Palermo is anything like his father, John, he is expected to be more vocal on the practice field than Trent and longtime line coach Steven Haywood.

“Jason is anything but laid back,” Christophel said. “He has been biting at the bit to get out there. Things will happen that we will have talk about, but in the long run I think he will help them improve and mature. I also think we are going to have to be a little tougher.”

Leading the offense should be senior third-year starting quarterback Jake Ryan, who passed for nearly 1,500 as junior.  His top target, Devin Stark, had 53 catches and seven TDs, highs for a Governor since the 206 season.

Austin Peay must find a tailback to replace second-team All-Ohio Valley Conference selection Ryan White. Back up Wes Kitts will get the first crack, but sophomore Ean Pemberton and redshirt freshman Reco Williams also will challenge.

Defensively, the Govs are going to remain in the 4-2-5 scheme, but are trying to changing their defensive approach by utilizing their speed in most cases. They must replace safety Amius Smith, who had 8.5 tackles for loss last year. But the Govs return safety Antwaun Majors, who led the team in tackles, along with linebackers Josh Carroll (76 stops), Darrick Dillard (52 tackles), Craig Salley and Josh Owens.

Up front the Governors have shifted defensive end Iosua Siliva inside to tackle to take advantage of his skills while moving Anthony Marion from tackle to end. In addition, former linebackers Zac Burkhart and Zach Lane are now permanently defensive ends after playing linebacker in the past.  They will join returnees Rip Rowan, Earnest Smith, Preston Gilbreath along with DeAndre Carroll. In addition, redshirt freshmen John Houston and Leonard Amarh also will challenge in the spring.

“We still are going to stick with the eight man front,“ Christophel said. “The big thing is the front people are really going to have to come on.

“We have six guys inside and it is going to be interesting to see what happens.”

Other than losing Smith, the secondary also saw cornerback Sheldon Wade elect not to return.  Meanwhile, Majors will switch to strong safety to team with EnRiques Perry while sophomore Jonathan Shuler is the frontrunner at free safety. At weak safety, sophomore Steve Rich and redshirt junior Jeremy Ross will lead the way. The Govs are six deep at cornerback, with returnees Steven Ragin and Tyreon Clark providing experience. Local product, J.J. Rutledge should challenge for immediate playing time.

After Friday’s first pad practice, the Governors will scrimmage for the first time, 2:00pm, Sunday, in Governors Stadium.