HomeNewsJohn Tidwell getting to know his District
News

John Tidwell getting to know his District

Clarksville, TN – District 74 State Representative John Tidwell makes the first impression of a “good old country boy” who just climbed out of the combine to greet you.   Once you get him started, he’s like your country neighbor talking about the crops and the livestock, he’s probably not going to stop talking until you tell him you’ve got to get home for dinner, but make no mistake, he’s just as comfortable roaming the halls of the Tennessee Legislature as he is leaning against the fencepost “shooting the breeze.”

Tidwell was a guest on “Clarksville in Review” this weekend on WJZM 1400am with host Hank Bonecutter, on the heals of last Thursday’s primary where Lauri Day defeated Nick Steward for the republican nomination.

“I really watched that race pretty close, and I thought Nick worked the campaign trail pretty hard and thought he would win the nomination, but the bad news about Nick came pretty fast and furious and that probably did him in.   Mrs. Day leans more toward the Tea Party politics, she’s home schooled, and doesn’t have any public service experience, but I take each election very seriously and want to meet all of the people of my district.  I think character matters and the people want good honest hard working representation. Clarksville is a growing community with a huge military influence, so I’m getting to know the dynamics of what makes this a great city.” 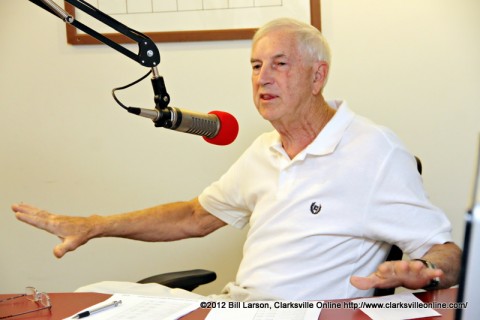 Tidwell has managed to navigate the legislature for 16 years and says he doesn’t get into the party politics and “fighting” between the two.  “I can work with both parties.  I’m not interested in committee chairmanships, and the power struggle in Nashville.  I’m interested in what’s best for the people in my district.  I have a very conservative approach to things, and that’s how I approach the legislature.”

Tidwell’s district has been redrawn three times and at one time he represented the largest geographical area of any state representative.  His new district is somewhat smaller than before, but is still a mostly rural district.

“I have always focused on rural issues and am very concerned about TVA.  I just returned from Washington D.C where I met with Senator Lamar Alexander discussing the New Johnsonville Steam Plant, and Coal Ash and the outrageous salaries that are paid to TVA executives.”

To listen to the entire interview on WJZM’s podcast.