Clarksville, TN – Junior Haylee Shoaff, of Austin Peay State University women’s soccer team, has been named the Copies in a Flash APSU Athlete of the Week.

Shoaff shutout Tennessee Tech and Jacksonville State over the weekend, amassing 11 total saves and helping the Lady Govs clinch a berth in the Ohio Valley Conference tournament for the first time since 2010. Her efforts netted her second career OVC Goalkeeper of the Week honor, her first of 2012, and CollegeSportsMadness.com’s OVC Player of the Week honor. 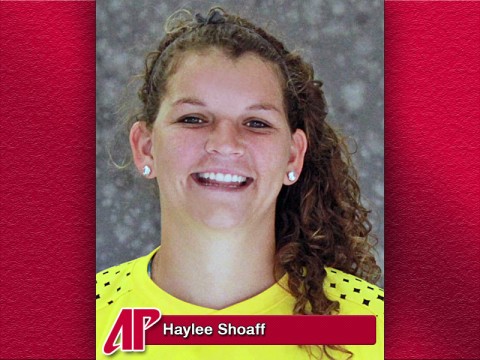 Shoaff has been stellar since the start of OVC play, allowing just four goals and shutting out five opponents in leading the Lady Govs to a 5-2-1 OVC record. She’s saved 46 of 50 shots faced and shut out five of her last six opponents.

With two games remaining in the regular season, Shoaff’s 87 saves ranks third in the conference and her 1.03 goals against average would be third-best in school history if she maintained the current pace.