Write In A Republican, Veteran for Tennessee State Representative, District 67

Clarksville, TN – Wouldn’t you enjoy seeing a regular guy win? What if you could be a part of making that happen? You have the opportunity to do just that on Tuesday.

You could make the difference!

Tuesday is election day.  There are 11 precincts that need coverage in Clarksville.

Check out Mike Warner’s website: www.TNHouse67.com.  Link from there to his facebook page.  We have received an incredible reception from those we’ve been able to reach, the key is making sure enough people know they have a choice. 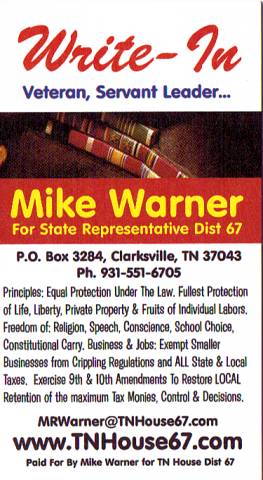 They can write-in Mike Warner for State Representative, District 67.  Without volunteers on Tuesday many will not find out in time.  It would be a shame, wouldn’t it?

It is very easy to do with the machines being used at the polls in Montgomery County.

Mike Warner was at early voting every day. He has been walking the district, talking to thousands of people one on one. If elected Mike Warner will not set in his ivory tower taking and giving favors to a few.

Mike Warner is a regular guy who will depend on input from you, to represent you. 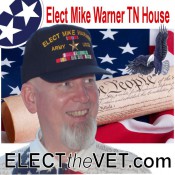