Mazar-E-Sharif, Afghanistan – As the only transportation company in Regional Command-North and nearly a couple months away from completing their deployment in Afghanistan, a special group of tight-knit soldiers drive on as they continue to conduct convoy escort team missions.

The 1245th Transportation Company, 1034th Combat Sustainment Support Battalion, gear-up daily to support Task Force Lifeliner, which is charged with the sustainment of the warfighter, all while supporting the retrograde mission.

With the support this unit provides, two forward operating bases have already closed down. They continue to support the soldiers at other FOBs by ensuring they receive enough supplies – like food, water, ammunition and other items needed for sustainment of the mission.

Although they drop off sustainment supplies, they never leave a truck empty. Prior to heading back to their home base, they load their trucks with retrograde materiel. This is equipment that is no longer needed at their location, and that can be sorted and reset for other military missions at other locations.

Routine may be synonymous with their daily tasks, but the soldiers gather around in the dry, heat of the summer and prepare their weapons and vehicles for their mission set. Preparation has many layers; the soldiers have to pack their snacks, load their trucks, perform maintenance checks and make sure that the local national counterparts they will be traveling with are ready to roll. 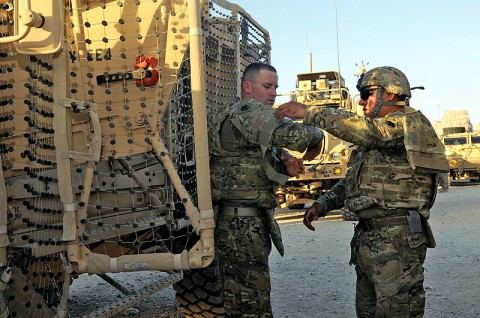 This particular day, they were packed and ready to deliver sustainment commodities to two FOBs in RC-N and bring back equipment the warfighters don’t require any longer to complete their missions.

As the months have passed, away from home, the workload and vigilance increased for these down-home soldiers from Oklahoma Army National Guard. With hard work and good soldiering the company proved that their soldiers had discipline on the road and on the radio. In addition to that discipline, they always ensure their buddies in uniform and their local national counterparts that work with them are well taken care of.

Increased credibility from their higher headquarters, created an increase in their production, meaning more days on the road, and heavier loads.

“At one point it was like we’re going out, we have two days off and then we get ready and start prepping for another mission, again going right back out, just because they know we can handle them,” said Sgt. Mireille T. Mistkowski, a native of Midwest City, OK, with 1245th Transportation Company.

Although the soldiers take on this mission with pride and eagerness, they maintain a complacency check in the form of great leadership.

One thing 1st Sgt. Clint C. Caraway, the 1245th Transportation Company first sergeant and a native of Konawa, OK, wants his troops to keep in mind, is that they are in a combat zone, and every time they go outside the wire their threat level awareness needs to be at 100 percent. The soldiers need to focus on looking for the threat every single time they roll out. These threats are not only the enemies of Afghanistan, but the dangers of a complex road structure.

“Just trying to stay vigilant, you know you’re watching the trucks in front of you,” said Spc. Dustin J. Johnson, a native of Plano, Texas, and motor transport operator with 1245th Transportation Company. “Our job is to provide security for our loads, whether that be our NATS [local national trucks] or our PLS’s [palletizing loading system trucks], so I’m watching out for threats, watching out for IED’s [improvised explosive devices], we’re watching out for what’s going on in the terrain.” 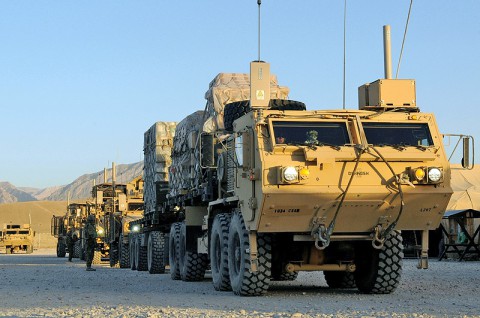 He also added one of the biggest hazards they have found is fatigue on the road.

Even with dedication and vigilance, this unit has faced some challenges along the way. Heavily used equipment needs much maintenance, said Caraway. He stated that the biggest challenge is getting the equipment back up to where it needs to be after each mission.

“We spend a lot of time working on the trucks and rehearsing battle drills,” Caraway added.

Battle drills are a way of training for both the unexpected and expected.

The 1245th Transportation Company is a rare unit that when encountered you can’t help but feel as though they are one big family. Trust, loyalty and support are what make them the unit they are today.

They have strong leadership who ensures the work is properly done and soldiers take care of each other. They have leadership, especially their first sergeant, who mentors and inspires the formation of soldiers on a daily basis.

“He’s always looking after his troops,” said Johnson. “I know that when we’re out on missions he’s sleeping in the office. From day one he’s been tough but fair. You know that he’s looking out for your best interest; he’s not sitting back and taking it easy. He’s doing as much or more than you out here.”

Johnson was very clear on describing the leadership role of his first sergeant.

“You know he cares, making sure we’re doing inspections of our trucks of our weapons. Taking the time to personally invest and show between him and our commander this is what’s important; this is why we’re here. And every guy and every mission is important to them,” Johnson said with a matter of fact attitude. 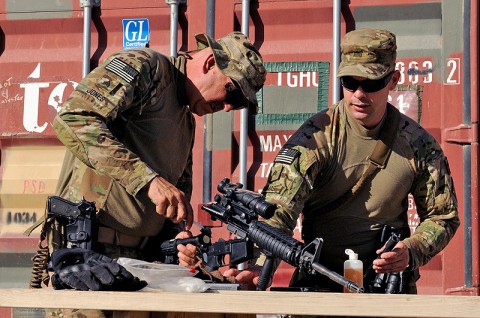 Caraway has one goal that he hopes to achieve as their tour in Afghanistan comes to an end.

“Ten fingers, 10 toes and 111 soldiers at the welcome home ceremony in Oklahoma; that’s my perfect picture,” said Caraway with a smile. “I told my wife don’t be in a hurry to leave, cause I got to see my soldiers hold their babies that they’ve never seen and mamas and kids, and brothers and daddies, and you know the ones that say first sergeant you take care of my daughter you know that’s the, that’s the tough ones.”