Clarksville, TN – The next meeting of the Clarksville (TN) Civil War Roundtable will be on Wednesday, February 19th, 2014 at the Bone & Joint Center, 980 Professional Park Drive, right across the street from Gateway Hospital. This is just off Dunlop Lane and Holiday Drive and only a few minutes east of Governor’s Square mall.

The meeting begins at 7:00pm and is always open to the public. Members please bring a friend or two – new recruits are always welcomed. 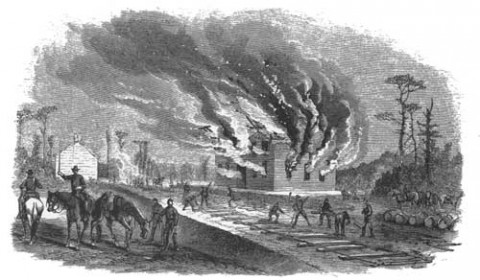 These raids delayed the Union advances on Chattanooga and Vicksburg by five months while capturing supplies needed by the Confederates. The loss of these supplies hurt the Union war effort as each of the armies involved lost valuable time trying to replace these losses.

Additionally, more time was lost to the Federals due to having to repair broken railroad lines and bridges over which these supplies flowed. With the Confederates outnumbered and a major Union offensive pending in Tennessee, these raids helped offset that balance of numbers allowing the Confederates to place forces to stop the Union incursion. These raids showed what cavalry could do under bold leadership.

Michael R. Bradley is an established Civil War expert and author of many books on the Civil War and Tennessee, including They Rode with Forrest and Nathan Bedford Forrest’s Escort and Staff, both published by Pelican.

He received his bachelor of arts degree from Samford University in Birmingham, Alabama, his bachelor of divinity degree from New Orleans Baptist Theological Seminary, and both his master’s degree and doctorate from Vanderbilt University. Bradley taught US history at Motlow State Community College in Tennessee for thirty-six years before retiring in 2006.

In 1994, he was awarded the Jefferson Davis Medal in Southern History. He is a member of the Southern Historical Association, the American Society of Church History, the Great Smoky Mountains Natural History Association, and the Society for Military History. In 2010, Gov. Phil Bredesen appointed Bradley to serve on the Tennessee Civil War Sesquicentennial Commission.

This presentation, based on his new book and presented by an expert on the Tullahoma Campaign and the exploits of General Nathan Bedford Forrest, promises to be informative and enjoyable. Mark your calendar and don’t miss this one – the program packed the house at the December 2013 Nashville CWRT meeting! Dr. Bradley will have books for sale at the meeting.