Clarksville, TN – The award-winning broadcast journalist Soledad O’Brien doesn’t shy away from difficult subjects. Her reporting on Haitian orphanages following a massive earthquake in that country earned her an Emmy, and her work for CNN during Hurricane Katrina brought her and the network a George Foster Peabody Award.

At 7:00pm on March 25th, O’Brien will speak at the Memorial Health Gym (Red Barn) on the Austin Peay State University campus as part of the annual Student Affairs Unity Celebration. O’Brien will deliver a speech titled “Diversity: On TV, Behind the Scenes and In Our Lives.” 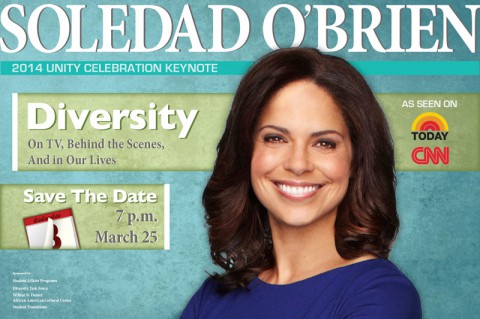 The event is free and open to the public, and sponsored by Student Affairs Programs, the APSU Diversity Task Force, the Wilbur N. Daniel African American Cultural Center, Student Life and Engagement and Student Transitions.

In 2010, O’Brien used her reporting skills to tackle another challenging topic – her own personal story as a minority journalist working in America – with her memoir, “The Next Big Story: My Journey Through the Land of Possibilities.”

“I began life as the child of a mixed-race marriage growing up in a white suburb, treated sometimes as a creature of bad circumstances,” she writes in the introduction. “My immigrant parents made sure I had the potential to capture my American dream anyway. I was handed a life of possibilities.”

O’Brien is a graduate of Harvard University and former anchor for the NBC program “Weekend Today.” In addition to reporting for CNN, she developed the popular documentary series “Black in America,” and later “Latino in America,” for the network. In 2013, she joined HBO’s “Real Sports with Bryant Gumble.”

Her documentary “Latino in America 2” won the Cine Award, and she was previously named journalist of the year by the National Association of Black Journalists. Newsweek also named her to its list of “10 People Who Make America Great.”

O’Brien is a Distinguished Fellow at Harvard University, and she was recently appointed to the Board of Directors of the foundation for the National Archives.

This semester, APSU freshmen are reading her acclaimed book as part of the Spring Peay Read.

For more information about O’Brien or the Unity Celebration, call the APSU Office of Student Affairs at 931.221.7341.