Fort Campbell, KY – Change occurs constantly in the Army. Units receive a steady stream of new Soldiers to replace Soldiers who leave for new assignments, retire or move on for a variety of other reasons.

Equipment and uniforms change over time. Policies, procedures and tactics are also constantly evolving. Units activate and inactivate. The Army is always changing.

However, in spite of the constant change, units and Soldiers uphold traditions and remember the Soldiers who came before them.

For the Soldiers of the 101st Special Troops Battalion, 101st Sustainment Brigade, 101st Airborne Division, one tradition they have is honoring members of the battalion who were killed during an attack on Forward Operating Base Gamberi, Afghanistan, April 16th, 2011.

Inside the battalion is a display case with photos and other mementos of the five fallen heroes. The battalion named their conference room the Gamberi Conference Room as another reminder of the ultimate sacrifice made on that horrific early morning. One of the biggest events the battalion does each year is to commemorate the fallen with a run at Fort Campbell, KY. 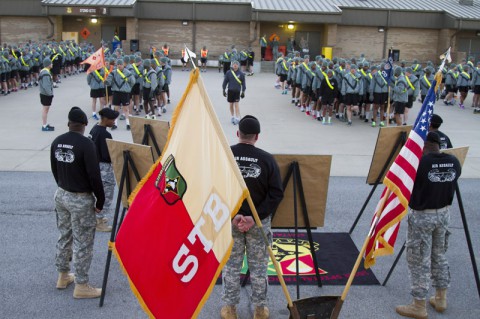 For the third year in a row, the battalion gathered April 16th to devote time to remember and pay honors to the lives lost. The photos came out of the display case and into the unit area while Soldiers formed up close by.

Before the run, the battalion leadership addressed the formation. Despite having changed command twice since the suicide-vest attack, the unit has not forgotten those who made the ultimate sacrifice for our Nation. 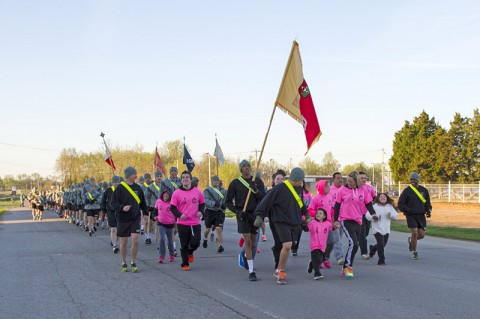 “Today we celebrate the legacy of our fallen and reaffirm our commitment to support the survivors and family members,” said Gallegos, a native of Boise, Idaho. “As you call cadence today, you do so in a manner indicative of the spirit and memory of your fallen comrades.”

The battalion chaplain, Capt. Jason Price, said it was a day to live up to the Army values and never leave fallen comrades.

After the address and invocation, Gallegos led the formation on the run.

As the battalion started the run, a group of family members wearing neon pink Run for the Fallen T-shirts ran at the head of the formation with Gallegos.

The pink shirts, proudly emblazoned with Sgt. 1st Class Charles Adkins’ name, along with the battalion colors and the company guidons added color to the columns of gray physical training jackets as the formation ran down A Shau Valley Road. The Soldiers made their cadences ring out loudly in honor of those who will never run again.

Then Gallegos, other unit leadership and family members shared a few final thoughts.

“We are called here today to reflect on the lives of these brave men and women and to affirm our sacred vow that we will never forget … never forget that freedom is not free,” said Gallegos. “Now we owe a great debt of gratitude to the families …”