Clarksville, TN – March is always a perplexing time in the college basketball world. Teams that are left out of the NCAA Tournament feel snubbed, teams that are in always feel like they’re seeded too low and those forced to face a favorite on their home court early on will always wonder what might have been.

Fans feel it too. Turn on  sports talk radio during March and the conversational tide is less about ‘who’s a contender’ and ‘who got robbed by the selection committee?’ It’s a fun debate.

For most, it’s not solvable – try as we might, the uninitiated, those who haven’t seen behind the curtain of what goes into the selection process, will never understand how it works.

Carrie Daniels will though.

Austin Peay’s head women’s basketball coach recently found herself in Indianapolis at NCAA headquarters, getting a crash course in what goes into picking the field of 64 for the NCAA Women’s basketball tournament. As you might imagine, it’s stressful.

When Rick Nixon, NCAA Associate Director of Media Services, sent out the message to each conference that the NCAA would be putting on this ‘mock selection’ event, Daniels leapt at the opportunity. Little did she know what was ahead.

“In eight hours, we went through an exercise that the committee goes through over four days,” Daniels said. “They gave us an in-depth, inside look at how they choose the 32 at-large teams, how they seed, everything.” 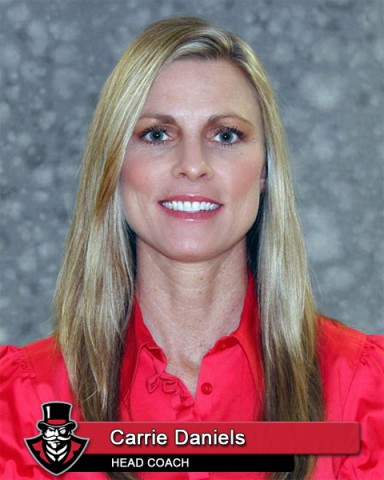 Working out the model was of particular importance for the NCAA, since it doubled as a trial run for changes coming in next season’s selection process. With the top 16 seeds earning the right to host first- and second-round – dependent upon the institution meeting hosting requirements – a few tweaks to the old formula were necessary since seeding will play such a huge role in the women’s tournament going forward.

As it is for the actual committee, deciding on the final four teams to put in the field was the toughest part of the mock selection process.

“It really gets sticky deciding on the last four in and first four out,” Daniels said. “The body of work becomes so comparable and it’s tough deciding who to put through and who has to go to the NIT.”

The standard buzzwords and phrases of March – last 10 games, RPI, non-conference schedule, strength of schedule – rear their respective heads during the selection process, but the committee has way more to work with than that.

The committee also breaks down game film, uses software specially coded to the seeding process (“Definitely the coolest thing they had,” Daniels said) and solicits input from the regional advisors who make the appeals for teams from their area to the committee during the process.

Despite the prognostication of the field becoming a cottage industry during March and keeping Joe Lunardi gainfully employed, external factors don’t really apply.

“No one factor is more important than the other,” Daniels said. “There’s a long list of things they look for and they take everything into account. They can’t really afford to get caught up in the speculation and whether people get mad about who’s in or out.”

The slotting process may be the most intricate. With four lines to every seed, there are opportunities to move teams around to fit the lengthy criteria. But after earning their spots thanks to their play, the higher seeds will always be well-taken care of.

“The last thing you ever want is to move someone down a seed line,” Daniels said. “If at all possible, the committee tries not to punish teams that have worked hard and been successful. The only time a team might get shuffled is if the software kicks up an issue – conference foes who potentially meet too early in the tournament, non-conference opponents that already met in the regular season – but even then, where possible, you want to keep a team on their same seed line and not move them down and punish the team because of a scheduling issue. Most of the time, it works itself out.”

The mock was based on last season’s bracket, with plenty of help from the committee members on hand to answer questions. Still, Daniels said there were points when the committee and the participants still came up with a couple of different observations on how to seed.

So next March, when the Lady Govs are (hopefully) watching the Selection Show inside the Dunn Center and anxiously awaiting their spot in the field, Daniels will know what those folks are feeling.

“After going through it, it gives me a whole new look on the process,” she said. “When the brackets come out, you have so many critics and I have a whole new respect on what they do and why they do it. I feel very fortunate to have gone through it. In the future I will take a much closer look at what happens and how everything shakes out.”