Stotts, of Hoffman Estates, Illinois, was named the league’s Offensive Player of the Week after posting 75 kills (4.17 per set) in five matches this week. She recorded a .290 attack percentage and added seven service aces and six blocks to her week’s tally. It is her second career offensive weekly honor from the league. 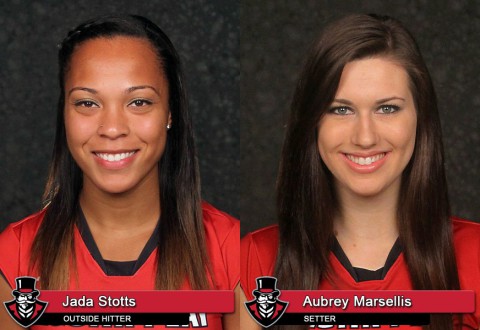 Marsellis, of Owasso, Oklahoma, earned her first adidas® OVC Setter of the Week honor. She had 195 assists (10.83 per set) while marshaling the Lady Govs offense to a .246 team attack percentage. Marsellis also had 23 kills (1.28 per set) and 16 blocks (0.89 per set) during the week’s five matches.

Joining Stotts on the DISH Lady Vol Classic all-tournament team, Marsellis posted 150 assists (10.71 per set), 17 kills and 12 blocks during the tournament. Her best outing assist-wise came against Mercer, with 41 assists in the three-set match.

More than a setter, Marsellis had seven kills and four blocks along with 45 assists against Montana State. She also had four kills, four blocks and 35 assists in the three-set win against Tennessee.

The honors are the first league honors for the Lady Govs this season. Austin Peay opens its OVC schedule when it hosts UT Martin in a 6:00pm, Friday contest at the Dunn Center.