Fabbro was honored at the annual postseason awards banquet, held each year prior to the start of the OVC Tournament. 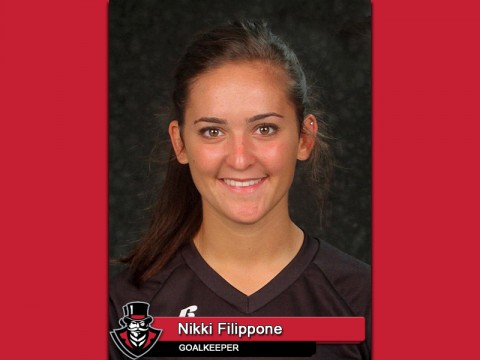 “Gina is an example of what every coach would want on her team,” said head coach Kelley Guth. “This is a well-deserved acknowledgment of her contributions to our team this season.”

The Coquitlam, British Columbia, native enjoyed a sophomore campaign just as exemplary as her freshman effort, leading the Lady Govs in scoring with seven goals, tying her first-year mark and equaling the sixth-best single-season scoring effort in school history.

Fabbro did much of her work in OVC play, scoring five goals against conference opponents (tied for fourth in the league) and totaling 11 points (tied for seventh). She started conference play with a bang, netting her season’s lone multi-goal outing in the Lady Govs OVC-opener against Eastern Kentucky.

“She scored a number of important goals for us this season,” Guth said. “Game in and game out, she was the most consistent, hard-working attacking player we have. It was nice to see her take on more of that responsibility this year, since we graduated such a large part of our attacking group from last season.”

Her season’s final goal in the season finale against Belmont was another milestone – it was her 14th  career tally, tying her with Jessica Hosse (2004-07) and Emily Perkins (2011-12) for fourth all-time in Austin Peay history. She also equaled Hosse with 33 points, good for sixth all-time in scoring.