Clarksville, TN – Junior guard Tiasha Gray, of the Austin Peay State University women’s basketball team, has been named the Copies in a Flash APSU Athlete of the Week.

Gray scored 20 points in back-to-back games for just the second time in her career, averaging 20.0 points, 7.0 assists and 6.5 steals in the Lady Govs Thanksgiving weekend trip to Hattiesburg, Mississippi, for the Southern Miss Thanksgiving Invitational. 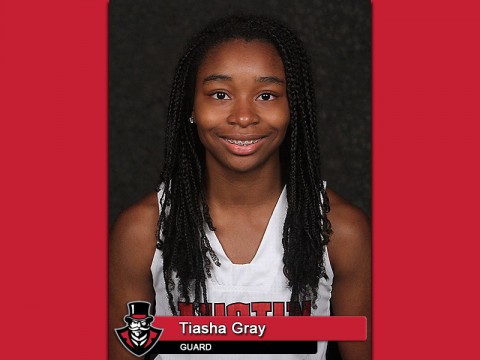 The Clarksville native led a furious comeback against the hosts in the opener, Friday, with Austin Peay charging back from 22 points down to within five with under five minutes left before dropping the opener 80-71. Gray finished with 20 points, seven assists and five steals while knocking down four three-pointers.

She again posted a 20-point effort against Oral Roberts in Saturday’s consolation game, along with seven assists and a school-record tying eight steals.