Clarksville, TN – Austin Peay women’s basketball team will play in the Dunn Center for the first time in a month when it hosts Belmont in a 5:15 pm, Thursday, Ohio Valley Conference contest. Thursday’s game will start a quick three-game, five-day homestand for the Lady Govs. 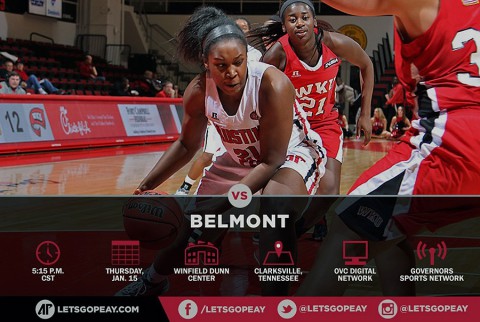 The Lady Govs dropped their first OVC matchup in a 75-71 loss at Tennessee Tech, Saturday. Austin Peay fell into a three-team tie for fourth place with that loss and will seek to keep pace with that group Thursday.

In Saturday’s loss at Tennessee Tech, the Lady Govs overcame a slow start that saw them trailing by 12 points, 18-6, less than five minutes into the contest. Austin Peay recovered in the second half, using an 18-5 run to build a four-point lead. However, they could not hold on in the closing minutes, going without a field goal for more than three minutes.

Junior Tiasha Gray finished with a game-best 24 points for her eighth 20-point outing of the 2014-15 season. Sophomore Jacey Scott added a career-high 10 points, including five-straight points to give APSU its first lead in the second half.

Austin Peay returns home for the first time since a December 16th loss to Western Kentucky, posting a 3-3 record during its intervening 30-day road trip. The Lady Govs are just 2-3 at the Dunn Center this season with wins against Grand Canyon (November 22nd) and Brescia (December 6th). APSU lost its last two home contests before starting the road trip.

Belmont brings a 1-3 OVC mark into Thursday’s meeting, including a three-game losing streak. The Bruins opened OVC action with a decisive win against Southeast Missouri, but have suffered losses to UT Martin, SIUE and Eastern Illinois since that win. Sierra Jones has posted a team-best 12.0 points per game in OVC play, well above her 5.8 points per game in nonconference action.

Frankie Joubran has been Belmont’s frontcourt leader, averaging 9.8 rebounds per game this season (8.8 rpg in OVC play). Second-year head coach Cameron Newbauer has used 10 different players in his starting five this season, with Joubran and Jordyn Luffman-Hartsfield each starting 16 of the team’s 17 games.

Austin Peay battled back from an early deficit but could not find a game-tying basket in the final 30 seconds and fell to Belmont, 69-67, last season in Ohio Valley Conference action at the Curb Event Center.

Belmont responded on its next possession and regained the lead when Jordyn Luffman converted a conventional three-point play.

The Lady Govs would tie the game one more time, 65-65, when Kristen Stainback hit a three-pointer with 1:20 left. The Bruins scored on their next possession and Austin Peay could not find a tying basket despite two opportunities within 5 feet. Belmont would hit a pair of free throws to extend the lead to four points and Austin Peay would not recover.