Clarksville, TN – After dropping a 98-84 decision to the rival Racers, February 7th, Austin Peay State University women’s basketball team looks for some payback when the Lady Govs travel to Murray State for a 3:00pm, Saturday, contest at the CSFB Center.

Austin Peay is on the road for the final two games of the regular season, beginning at Murray State were it has not won since 2012.

But with an Ohio Valley Conference tournament bid this close, the Lady Govs will need all hands on deck to secure the spot.

Even after a relatively quiet game against SIU Edwardsville, junior Tiasha Gray remains a force to be reckoned with. The Clarksville native is averaging 20.3 points and scored 31 the last time she squared off against the Racers. 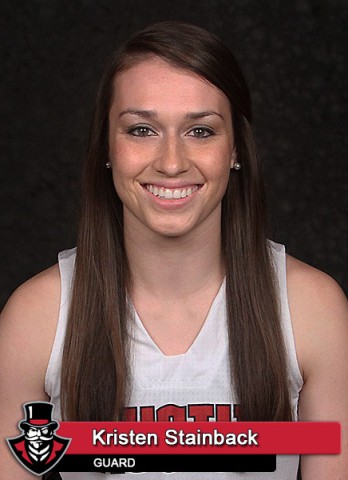 Kristen Stainback has a chance to make history in the Bluegrass State. The senior from Georgetown, KY, needs just 11 points to become the 18th player in Austin Peay history to reach 1,000 points. She had 11 points the last time the two teams met and has averaged 6.8 ppg in eight career games against the Racers.

Murray State has done well at the free-throw line (73.6 percent) and beyond the arc (second in the league at 7.0 3-pt FG/g), but have shot poorly from the floor  (36.1 percent) during conference play.

Back To The OVC Tournament

In recent times, eight wins would be enough to guarantee a team a spot in the Ohio Valley Conference Tournament.

However, with the bottom-four teams currently a combined 10-41 in conference play, seven wins is a guaranteed invitation, and the Lady Govs – with tiebreakers over Eastern Kentucky and Southeast Missouri, who they will face again in the regular-season finale – need either a win or an Eastern Kentucky loss to assure itself a spot in Nashville on the first Wednesday in March.

It would be Austin Peay’s first visit to the championships since 2011-12, when the Lady Govs advanced to the quarterfinals before falling to Murray State.

The Racers have struggled through much of the Ohio Valley Conference campaign, having lost nine straight to start the OVC schedule before defeating Southeast Missouri and Austin Peay. The Racers have lost three in a row since defeating the Lady Govs back on February 7th.

Keiona Kirby, averaging 15.6 ppg, is second in the conference at 2.4 three-point field goals per game, and the Racers as a squad are averaging a conference-leading 7.2 threes per contest. The Racers average a conference-best 73.6 ppg, but that number drops to 70.4 (fourth in the league) during conference play.

Austin Peay came out on the wrong end of an offensive slug fest, dropping a 98-84 Ohio Valley Conference decision to Murray State, February 7th, at the Dunn Center.

Austin Peay (8-16, 5-6 OVC) got off to a quick start, scoring the game’s first six points over its opening two minutes. However, Murray State quickly responded with the game’s next seven points – Ajee Smith’s three-pointer giving the Racers a 7-6 lead with 16:11 left.

The Lady Govs would regain the lead on a pair of Kristen Stainback free throws and built a four-point, 13-9, advantage with 13:54 left thanks to Tiasha Gray‘s traditional three-point play.

Murray State (7-17, 2-9 OVC) again countered with the game’s next seven points, Keiona Kirby’s layup at the 12:43 mark ending the burst with the Racers holding a 16-13 lead. Austin Peay would rally to tie the game one last time, 23-23 with 8:23 left, when April Rivers converted a four-point play.

Netanya Jackson scored on the Racers ensuing possession to take the lead for good. Austin Peay had a handful of opportunities in the second half when it cut the deficit to a point or two.

However, each time Murray State responded on its next possession, keeping Austin Peay at arm’s length.

The Lady Govs made one final push with an 8-0 run, spurred by a pair of three-pointers by Madison Rich, to get within a point, 75-74, with 8:12 left. However, they Lady Govs committed a foul and Keiona Kirby converted both of her free throws to start a 9-2 run, extending the Racers lead to eight points with 4:43 left.

From there the Racers closed the game with a 14-6 run to seal the victory.