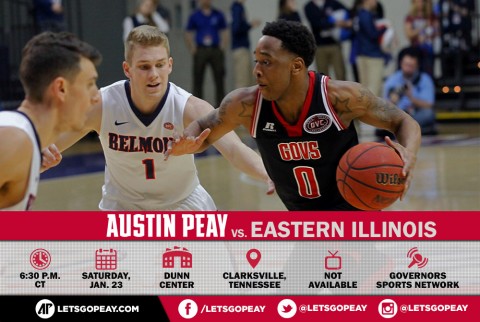 The Governors are coming off a dramatic 90-86 overtime victory against SIU Edwardsville, a contest they literally snatched from the jaws of defeat in the game’s regulation.

With the visitors up by three points, 76-73, with 8.4 seconds remaining, the Cougars Jake Newton missed a pair of free throws.

Josh Robinson grabbed the rebounded, raced up court and nailed a long three pointer with 0.4 seconds left to send the game into overtime, where Robinson finished off his spectacular 39-point performance by making a trio of free throws in the closing seconds to salt away the victory on the icy night that eventually produced some five-to-six inches of snow and ice in Clarksville/Montgomery County..

It was a much-needed victory for a Governors team, now 9-12 overall and 2-4 in the OVC West, whose confidence was waning after a trip to Nashville last weekend. They got off to a sluggish start, falling behind 10-0 in the first 3 ½ minutes. They trailed by double digits twice in the second half, the second time with only five minutes left.

But the Govs were energized by a trio of young players, freshmen Zach Glotta and Jared Savage along with redshirt freshman Chris Porter-Bunton. Savage hit a huge bucket early in overtime while Glotta hit the go-ahead three pointer with 58 seconds left. Glotta and Porter-Bunton each finished with 10 points. Glotta and Savage were on the floor down the stretch in regulation and during overtime.

Their respective performances were a lift for a team that saw center Chris Horton endure a rare struggling shooting performance, going 6-of-16 in scoring 15 points. He also grabbed 15 rebounds—the nation’s top offensive rebounder (5.33 pg) had seven offensive grabs—and now has 16 double-doubles this season.

The Governors will be playing an EIU club coming off a struggling shooting performance in a 68-58 defeat at Murray State, Thursday night. Eastern Illinois had two big scoring droughts with one occurring in each half as the Panthers fell at Murray State, 68-58.  A.J. Riley led the Panthers with 11 points scoring nine of them at the free throw line. Cornell Johnston added 10 points helping EIU climb to within eight points early in the second half. MSU limited EIU to just 31 percent shooting in the game.

Thursday’s defeat came after consecutive home wins against OVC East foe Eastern Kentucky and Morehead State last weekend. The loss also dropped Eastern Illinois to second place in the OVC West at 3-4. Picked to finish third in the OVC West in the league preseason poll, the Panthers come in at 6-13 overall.

Four Panthers are averaging in double figures, led by senior forward Trae Anderson, who is at 13.2 points to go with 4.5 rebounds per game. Guard A.J. Riley is at 11.6 points while point guard Cornell Johnston is at 10.9 points and 5.6 assists per outing. Guard Demetrius McReynolds, who leads the club in OVC play at 14 ppg, struggled to a nine-point outing at Murray.

Check www.letsgopeay.com for updates regarding any game-day changes or updates related to Saturday’s games.