Crozier was elected to Mayor of Clarksville in 1978, a position he held for eight years. 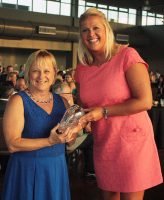 Dr. White became the tenth president of Austin Peay in 2014. Austin Peay serves more than 10,000 students, has a $120 million operating budget, and is a national leader in student success initiatives.

She has an undergraduate degree in business, a master’s degree in library and information science and a Ph.D. in mass communication.

New to the Chamber this year is the Boots to Suits Award.

This award honors military veterans who, through their professional and personal efforts, are making a positive impact throughout the business community. The inaugural Boots to Suits award was presented to David Berggren. Berggren owns three furniture stores in Clarksville, including Ashley HomeStore, plus a 60,000 sq.-ft. distribution center.

He actively supports the Hope to Dream program, Fisher House, and Kenwood Middle School FUEL program, and is an advocate for breast cancer awareness.

The 2016 Ambassador of the year recipient was Vicki Henson. Henson is a branch manager at Legends Bank and graduated locally from Northeast High School. In addition to her role with the Chamber, she serves on the board of directors for Tabernacle Christian School and is a member of Spring Creek Baptist Church. 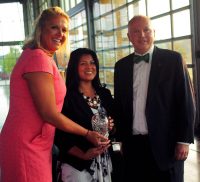 Cheryl Moss, portfolio manager at Legends Bank, received the 2016 Clarksville Young Professional award. Prior to joining Legends, Moss served in the U.S. Air Force for four years, then earned a Bachelor of Business Administration from Austin Peay State University and a Master of Accountancy from Belmont University.

About the Chamber of Commerce

The Chamber of Commerce was established in 1905 to represent the interests of the business community and its membership by advancing community development, promoting the business and economic environment, and improving the welfare of the community by enhancing the quality of life in the region.