That was announced at Wednesday’s annual OVC Media Day, held at the Sheraton Music City.

“I think preseason predictions are really fun and build excitement for basketball season,” said head coach Dave Loos. “In the end, this will be settled on the floor and as we found out last year, anything can happen.

Robinson earned a spot on the preseason All-OVC squad, giving the Govs a preseason all-conference selection for the fourth consecutive season. The St. Louis native averaged 16.9 ppg on 40.1 percent from the floor (83.4 percent from the line), hitting 72 total three-pointers for the season. 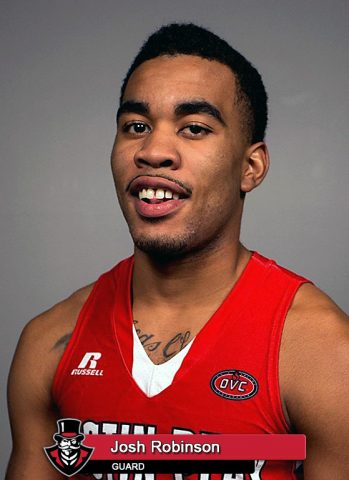 “I think a number of our players have grown through our experience last year and Josh is one of them,” Loos said. “He’s shooting the ball well. He has to understand that there will be a target on his back and he’s got to meet that challenge. I’m excited for the year coming up for him and a number of our players.”

The Governors tallied 88 points and two first-place votes in the poll, behind Murray State (131 points, 21 of 24 first-place votes) and Eastern Illinois (95 points). UT Martin (82) picked up the remaining first place vote, with SIU Edwardsville (54) and Southeast Missouri (42) rounding out the West selections.

“We’re excited to get this thing started,” Loos said. “I think we’ll be competitive and hopefully make a run at this thing again.”

Dave Loos and David Midlick were popular faces at the 2016 OVC Basketball Media Day in Nashville.