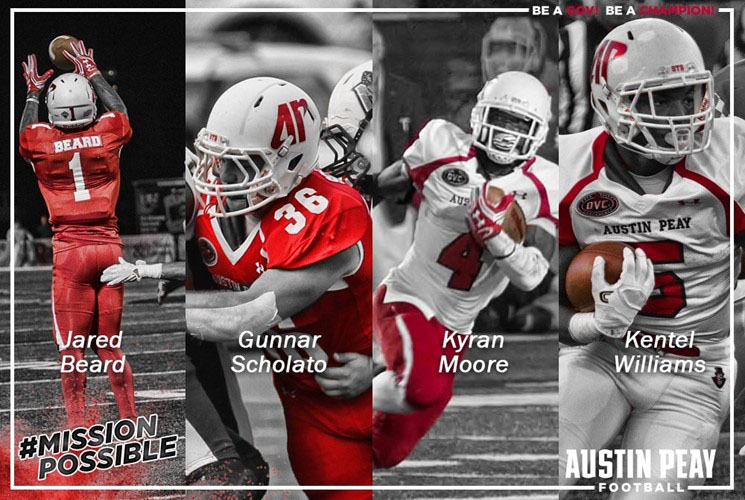 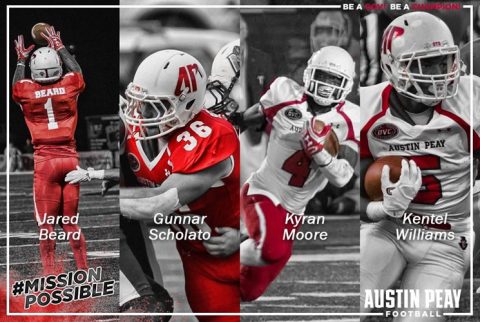 Beard is the first Gov wide out to earn OVC recognition since 1995 when Gary Williams claimed second team honors.

Beard led APSU with 910 yards on 81 catches including seven touchdowns.

His best game of the season came when he hauled in 11 catches for 181 yards against Mercer on October 22nd.

Two weeks later, he had eight catches for 146 yards and three touchdowns against Tennessee State.

Scholato finished tied for the OVC lead averaging 11.2 tackles per game. His average was good enough for seventh in the NCAA at the conclusion of the regular season. Scholato made a 124 total stops including 54 solo and 70 tackle assists. He also made seven tackles for a loss and picked off two passes.

His final INT of the same came on the road at Kentucky that was returned for 25 yards for a touchdown down. His best game of the season came on the road at Southeast Missouri State with 18 tackles – tied for the ninth best individual tackle performance in the NCAA on the season.  Scholato is the first Gov linebacker to earn All-OVC since Daniel Becker was named to the first team in 2009.

He also caught 27 passes for 392 yards and two touchdowns, while rushing 26 times for 116 yards. Moore also saw time on the Govs’ defense. He picked off a pass against Tennessee State on November 5th. He is the first Gov kick return to earn the honors since 2009 when Terrence Holt was named to the first team.

Williams, after making the transition to running back over the last five games of the season, averaged 106.2 yards per game rushing – the second best mark in the OVC during the same span.  He had 87 carries and gained 531 yards while accounting for six touchdowns. His six rushing TDs led the OVC during those final four weeks.

He also set the OVC all-purpose record with 399 all-purpose yards against Tennessee State. Following the TSU game, he became the first OVC player to earn three player of the week awards — offensive, specialist and newcomer. He also was named the FCS STATS Freshman of the Week.  Williams becomes the second Gov running back in as many season to earn OVC All-Newcomer team after Kendall Morris was named to the team in 2015.

The four league honors is the most for APSU since the 2009 season when seven players were recognized with postseason awards.