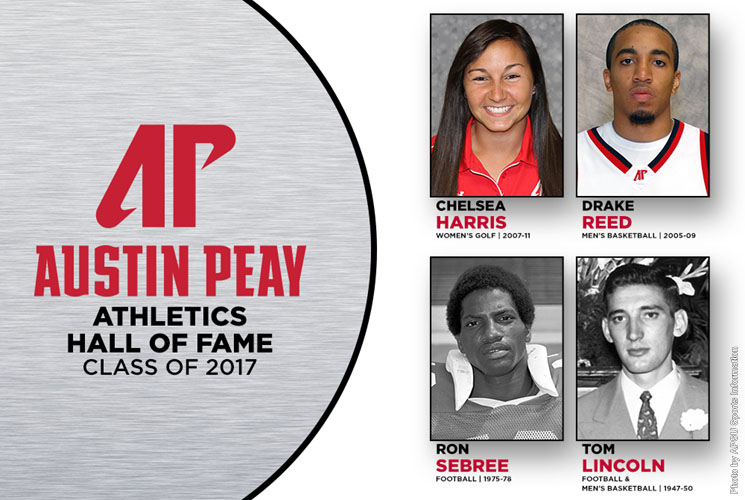 Drake Reed, a three-time All-Ohio Valley Conference basketball player and 2008 OVC Champion; Chelsea Harris, the 2010 OVC Women’s Golf Player of the Year and Austin Peay’s lone OVC Championship medalist; and Ron Sebree, one of the league’s most fearsome defensive linemen and a linchpin with the 1977 championship team have been selected for induction as part of the Austin Peay Athletics Hall of Fame Class of 2017. 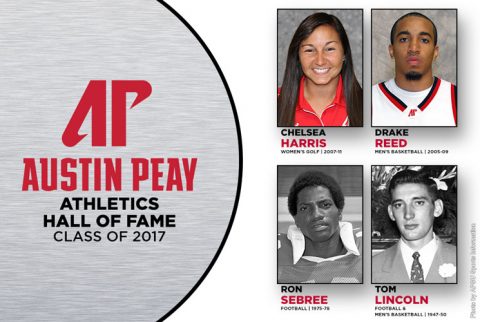 Additionally, Tom Lincoln, a multi-sport standout from the late-1940s, has earned induction as the representative in the Honors category.

Reed, a Clarksville native who elected to continue his college career close to home, immediately made his presence felt, winning OVC Player of the Year as a sophomore in 2007 and play an integral part in the OVC Championship as a junior. He finished his career with 1,991 points and 794 rebounds and remains Austin Peay’s career-leader in free throws made (476) and attempted (694); games started (125); and minutes (4,093).

Harris will be the first inductee from the women’s golf program and deservedly so. A four-time All-OVC performer, including three first-team selections, Harris was OVC Player of the Year and OVC Tournament Medalist in 2010—one of four OVC All-Tournament performances for Harris in a decorated career. She remains the program record-holder for single-round (69) and 54-hole (221) scoring.

Sebree was a fearsome defensive end who helped institute a program revival under Boots Donnelly, starring for the Govs and earning All-OVC in 1977 and 1978 and honorable mention Little All-America in 1977 after posting 135 tackles for the OVC champions. He remains third all-time in unassisted tackles (258) and fourth in total tackles (410), posting two 100-tackle seasons during his APSU career.

The fourth inductee since the Honors category was instituted, Lincoln was a two-sport standout when the Govs were in the Volunteer State Athletic Conference. As a football player, he was All-VSAC as an end in 1948, helping the Govs to a VSAC championship, and earned All-American honors in 1949. He played two seasons on the hardwood, returning for the 1949-50 year after missing the entire 1948-49 season with a broken leg.

Austin Peay will welcome the newest members of its Athletics Hall of Fame class with a 9:00am, Saturday, January 28th breakfast in the Dunn Center front lobby. They also will be introduced during halftime ceremonies of the Governors’ contest with Southeast Missouri. They will become the 115th, 116th, 117th and 118th members of APSU’s Athletic Hall of Fame.

For more information about the breakfast and reservations, call Tara Pfeifler, 931.221.6119 or email pfeiflerT@aspsu.edu.