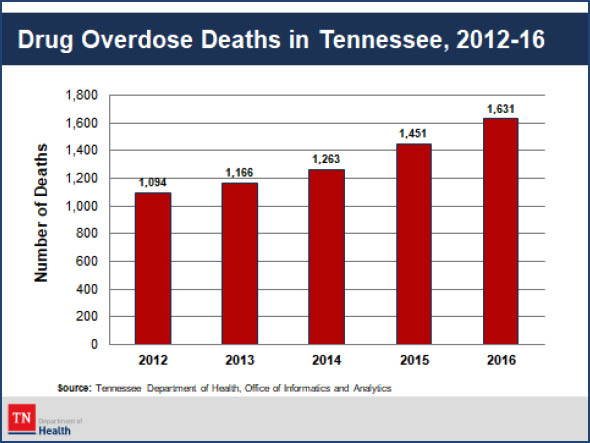 Nashville, TN – Tennessee Department of Health data show 1,631 Tennesseans died from drug overdoses in 2016, the highest annual number of such deaths recorded in state history. This is an increase from the 1,451 overdose deaths recorded among Tennessee residents in 2015.

“Each of these numbers represents a person, with family and friends who are now facing the loss of someone dear to them to a cause that is preventable,” said TDH Commissioner John Dreyzehner, MD, MPH. 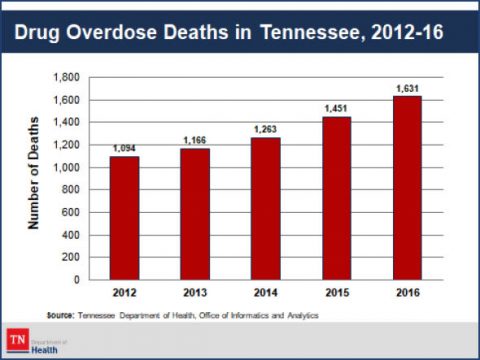 “The rate of increase in these deaths is slower than in the previous year, but it is still a horrible increase, and as we feared, our data show illicit drugs like fentanyl are now driving the increase,” stated Dreyzehner.

“If this is a threat to any of us, it’s a threat to all of us,” Dreyzehner continued. “Now more than ever, we have to work across our sectors and communities, recognize this epidemic is changing and evolving and find new and better ways to address it together.”

Overall, rates of death from drug overdose among Tennesseans have increased 12 percent from 2015 to 2016. Overdose deaths related to fentanyl have dramatically increased 74 percent from 169 to 294 in that time period. The biggest increase in fentanyl deaths is in those aged 25–34, where deaths increased from 42 in 2015 to 114 in 2016.

“We are alarmed by the growing number of Tennesseans dying as a result of fentanyl, and by the changing demographic of those who died,” said TDH Chief Medical Officer David Reagan, MD, PhD. “This tells us we need to put additional focus on prevention of substance abuse, particularly for those younger than 25, as we believe people are initiating their use of illegal drugs such as fentanyl before that time.”

TDH data show heroin was associated with the deaths of 260 Tennesseans in 2016, a 26 percent increase over the previous year.

“We know as it becomes harder to obtain illicit prescription pills, people are turning in greater numbers to substances such as heroin and life-threatening combinations with fentanyl and other substances,” said Tennessee Department of Mental Health and Substance Abuse Services Commissioner Marie Williams. “The increase in heroin use is especially concerning in larger cities. This increase in overdose deaths shows the vital importance of the additional funding Gov. Bill Haslam and the legislature allocated in the current fiscal year that will help up to 5,000 more Tennesseans battling addiction receive treatment.”

Tennessee drug overdose deaths due to stimulants like methamphetamine also increased substantially, especially in people aged 25 – 44, where they increased from 57 deaths in 2015 to 101 in 2016. Most people who die from drug overdose are found to have more than one drug in their systems that contributed to their deaths. TDH data show an increase in deaths where both opioids and stimulants were used, from 65 deaths in 2015 to 111 in 2016.

Buprenorphine, which is often used in medication-assisted treatment to help people recover from abuse of opioids, is increasingly associated with drug overdose deaths in Tennessee. TDH found 67 deaths associated with buprenorphine in 2016; 61 percent were also found to have a benzodiazepine drug in their systems at the time of death.

Almost all of these people were between the ages of 25 and 54. Benzodiazepines are tranquilizers such as Valium and Xanax, and are easily abused and best avoided when taking opioids due to worsening of respiratory depression and increased risk of death.

“We have worked to improve our surveillance when deaths occur, so this may contribute to some extent to the increase in the number of deaths attributed to drug overdose,” said Tennessee Chief Medical Examiner Julia Goodin, MD. “However, we believe these deaths remain undercounted and continue our efforts to improve data collection so we can better understand this crisis of drug overdose deaths in our state, and use that information to develop strategies for prevention.”

TDH has created the Tennessee Drug Overdose Dashboard to provide state, regional and county-level data on fatal overdoses, non-fatal overdoses and drug prescribing in the state. This interactive tool is the result of collaboration between the TDH Office of Informatics and Analytics and the Tennessee Department of Finance and Administration. Find the dashboard at http://tn.gov/health/topic/pdo-data-dashboard

County-level data in the dashboard will be updated this week.

Substance abuse is a treatable and preventable disease. Call the Tennessee REDLINE at 1.800.889.9789 for immediate help for anyone suffering from a substance abuse disorder.

Learn more about TDH services and programs at www.tn.gov/health